BY Heather Hughes on September 19, 2018 | Comments: one comment
Related : Soap Opera, Spoiler, Television, The Young and the Restless 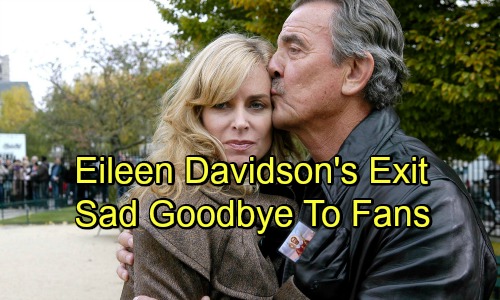 The Young and the Restless (Y&R) spoilers tease that the countdown is on! Unfortunately, Y&R fans aren’t looking forward to what’s at the end of this countdown. We’re talking about Eileen Davidson’s (Ashley Abbott) final days of filming. On Instagram, Davidson revealed that it’s her last week on set. She posted a brief video and talked about her imminent exit from the show.

Davidson gave viewers a glimpse of the studio and talked about how much Y&R means to her. She feels like she owes The Young and the Restless a lot for helping her pursue her dreams. It’s been a long journey and a wild ride, but Davidson seems to have loved every second of it. She said, “The first time I walked in here, I was not even 23 years old. How crazy is that?!”

Davidson is ready to step away, but she’s still bummed to be heading for the exit door. “I love this place,” Davidson said. “Changed my life in every single way.” She even met her husband there, so she’s not kidding! The Young and the Restless helped shape Davidson’s life and she’ll never forget that.

Davidson also sent out a heartfelt message on Twitter. She shared an inspirational quote and suggested she was really feeling those words at the moment. The quote from Winnie the Pooh said, “How lucky I am to have something that makes saying goodbye so hard.” Davidson added, “Oh! So very ME right now!” She included a weary face emoji along with one that’s crying.

Naturally, Y&R viewers chimed in with their thoughts in the replies. So many people are going to miss Davidson’s fantastic portrayal of Ashley. Plenty of fans insisted the show wouldn’t be the same without her. Naturally, Davidson’s supporters also begged her make a comeback eventually. With soaps, goodbyes often just mean farewell for now. You never know when someone might pop in again!

One Y&R watcher pleaded, “Don’t make this goodbye permanent- hope you’ll be back. Going to miss Ashley.” Another one exclaimed, “Very sad! I was hoping to see more of an Ashley/ Neil SL! Best wishes on your new ventures whatever they may be!” That viewer brings up a good point. It looks like Ashley and Neil’s (Kristoff St. John) romance is going to be cut short in the near future.

The Young and the Restless spoilers say the show will have to tie up several loose ends over the next couple weeks. There’s a good chance some Abbott family fighting will drive Ashley out of town. Things haven’t gotten too serious with Neil yet, but he should still battle some heartache. Y&R fans should feel the same way once Ashley finally bows out.

Will you miss Eileen Davidson as Ashley Abbott? How do you feel about all the big changes lately? We’ll give you updates as other Y&R news comes in. Stay tuned to the CBS soap and don’t forget to check CDL often for the latest Young and the Restless spoilers, updates and news.