The Young and the Restless Spoilers: Eric Braeden, Jordi Vilasuso and Abhi Sinay Speak Out in Shocking Twitter Exchange 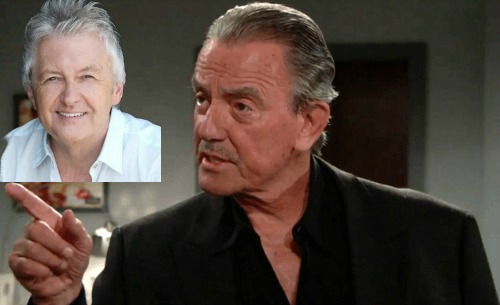 The Young and the Restless (Y&R) spoilers reveal that Eric Braeden’s (Victor) speaking out about the show’s legacy and the characters he considers important. On Twitter, Braeden hasn’t been shy about voicing his opinions. He’s made several statements regarding the state of the show lately, including ones that express disapproval of the writing and overall direction of Y&R.

Braeden’s latest statement involves a buzz-worthy video that’s been making the rounds. The Young and the Restless tweeted out this vid along with the caption, “We asked some of our cast about the #YR legacy, and now it’s your turn! Tell us what it means to you.” However, some fans objected to the use of a newbie. Jordi Vilasuso (Rey) hasn’t been on the CBS soap all that long, but he still weighed in.

Of course, the tweet just said they asked some cast members, not necessarily the ones that had been around the longest. Perhaps they wanted to get a newer perspective along with the views of established performers. Regardless, Vilasuso’s observations did raise a few eyebrows.

“I hadn’t seen it before I was actually up for the role, “Vilasuso said. “So I started watching it and I was just like this is a whole different animal. The intros, the music…” It’s admittedly a weird choice to include this in a video about The Young and the Restless’ legacy, but at least Vilasuso’s comments seem complimentary. He’s basically praising Y&R as a soap like no other.

Peter Bergman (Jack), Melody Thomas Scott (Nikki), Joshua Morrow (Nick) and Camryn Grimes (Mariah) were also part of this video, so there was no shortage of long-standing talent. Still, some Young and the Restless viewers were hoping for more. It appears Braeden would’ve preferred that as well. 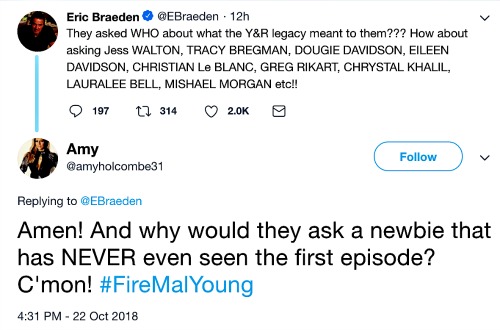 Braeden later retweeted a reply which said, “Amen! And why would they ask a newbie that has NEVER even seen the first episode? C’mon! #FireMalYoung” It’s serious business when Braeden’s spreading that hashtag. He’s obviously not afraid to take jabs at Y&R’s head writer and executive producer.

Jordi Vilasuso has fired back at Eric Braeden defending himself after Eric’s attack – see the Tweet below: 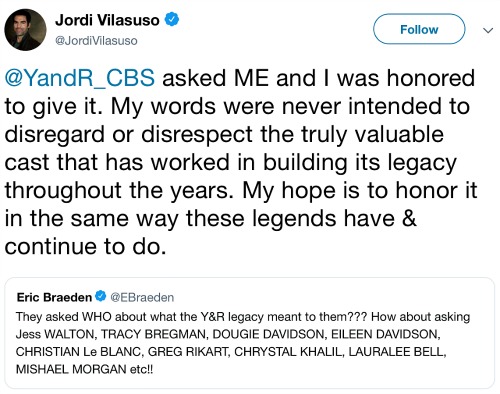 Meanwhile Abhi Sinha (Ravi) joined in the fray supporting Eric Braeden and attacking Mal Young! It seems like there is serious trouble behind the scenes at Y&R. 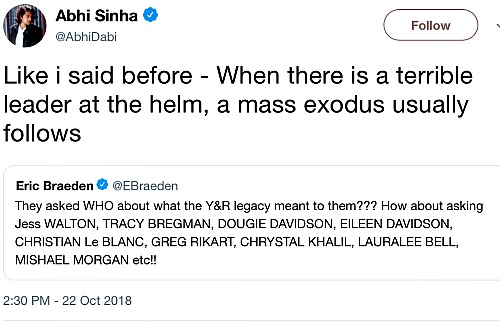 The actor also addressed his upcoming comeback. Braeden went on a lengthy vacation, but it won’t be long until Victor’s stirring up trouble in Genoa City again. In reply to a fan, Braeden made it clear that his return was imminent. He tweeted, “Oh, I’ll be back! You know me, on an extended business trip!! It’s going to be VERY interesting, just be patient!!”

Amen! And why would they ask a newbie that has NEVER even seen the first episode? C’mon! #FireMalYoung

We asked some of our cast about the #YR legacy, and now it’s your turn! Tell us what it means to you. ❤️ pic.twitter.com/aiC6pWFQz4