The Young and the Restless Spoilers: Eric Braeden Speaks Out on His Future at Y&R – Addresses Fans’ Departure Panic 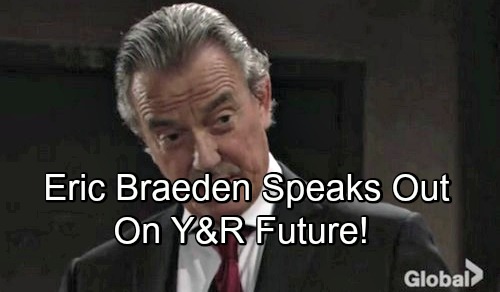 The Young and the Restless (Y&R) spoilers tease that Eric Braeden (Victor Newman) is speaking out on his future at the CBS soap. There’s been plenty of drama surrounding Y&R lately, so that’s brought questions about whether Braeden would stay or go. His angry retweets have fueled buzz about his potential departure, so his decision to take some time off sparked concern among fans.

However, Braeden recently set the record straight on Twitter. He wanted to let everyone know that his decision to step away was about hanging out with his family in Germany. Braeden’s just enjoying some rest and relaxation for the month of September. He intends to get back to set once his trip wraps up.

After viewers reached out to ask if Braeden’s departure was permanent, he offered a firm response on the matter. Braeden tweeted, “I will tell you all one last time, I AM NOT LEAVING THE SHOW! I am simply on vacation!” The actor behind “The Moustache” has had to answer this question many times over the past few years, so it seems he’s a bit fed up with it.

Of course, no one can blame Y&R fans for getting worried. The Young and the Restless has had a flood of major exits lately, so it wouldn’t be surprising if another big name bowed out. Again, Braeden’s retweets made a clear statement on his frustration with the show’s storylines and current direction.

One retweet said, “Still watch but disappointed in how they continue to make it too trashy in my opinion.” Braeden retweeted another fan who told Mal Young, Y&R’s head writer and executive producer, to get his act together and stop alienating the cast! When you consider the timing of Braeden’s break, it’s easy to assume his displeasure played a part in it.

Since Braeden won’t be around to film new scenes for a while, it looks like we won’t be getting Victor mayhem as we head into November sweeps. Due to the taping schedule, The Young and the Restless spoilers say they’ll have to focus on other characters during that period. There’ll still be lots of shockers going down, but Victor’s absence will be felt.

On the bright side, Victor will indeed make a comeback down the road. Eric Braeden has assured fans that we haven’t seen the last of the great Victor Newman! We’ll give you updates as other Y&R news comes in. Stick with the CBS soap and don’t forget to check CDL often for the latest Young and the Restless spoilers, updates and news.

I will tell you all one last time, I AM NOT LEAVING THE SHOW! I am simply on vacation!