BY Heather Hughes on December 22, 2018 | Comments: one comment
Related : Soap Opera, Spoiler, Television, The Young and the Restless 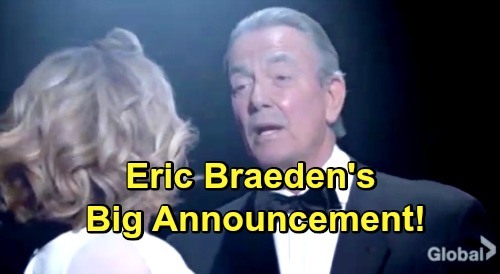 The Young and the Restless (Y&R) spoilers reveal that fans are anxiously awaiting some exciting shifts at the CBS soap. Mal Young is out as Y&R’s head writer and executive producer, so the show could have a very different vibe soon.

Josh Griffith is taking over the head writer position while Tony Morina fills that executive producer spot. This news has left viewers curious about what the future holds.

Griffith has had previous writing stints at Y&R, so he knows his way around Genoa City. It should be interesting to see his fresh take this time around. Young’s stories will have to be wrapped up as new ones get underway.

Of course, Morina will likely get rid of some newbies and perhaps bring back a few fan favorites. The transition period can take some time, but many fans and cast members feel it’ll be worth the wait.

Eric Braeden (Victor) certainly believes that! He recently spoke out about what’s ahead on The Young and the Restless, so let’s take a look what he had to say.

Braeden hasn’t been shy about expressing his disapproval for Young’s stories and focus on new characters. He’d rather see more vets in the mix and getting quality airtime. It seems Braeden thinks Y&R’s on the verge of making that happen. He pushed for patience from the audience and suggested that good things come to those who wait.

Braeden promised, “Some big changes at Y&R! Be patient! Changes will come…in time!!” It wasn’t long until fans were hitting those retweet and like buttons. There seems to be a great deal of support behind the idea of behind-the-scenes shakeups. Loads of Young and the Restless viewers replied to Braeden’s tweet and expressed hope for a positive transformation.

There’s been growing support for Doug Davidson (Paul) on social media as well. Will Paul be brought back now that someone else is steering the ship? Time will tell, but Davidson and many of his costars are rooting for a return.

Am on flight To ATLANTA, to see two of my grandkids !! HAVE A GREAT WEEKEND, everyone! Some big changes at Y&R! Be patient! Changes will come…in time!!