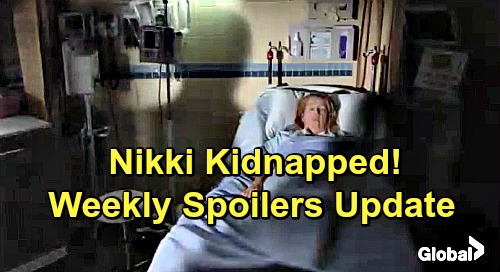 The Young and the Restless (Y&R) spoilers update for the week of December 24-28 tease that the Newman family will face another disaster. This one will happen right in the hospital! Y&R fans can expect Nick (Joshua Morrow) to panic when Nikki (Melody Thomas Scott) disappears from her room. As Phyllis (Gina Tognoni) and Victoria (Amelia Heinle) stand next to him, Nick will pull out his phone to call the cops.

Victoria will urge her brother to wait, but Nick will think they need to file a missing person’s report right away. He’ll insist that Nikki didn’t just get up and walk out of that bed on her own. She’s in no condition to do that. Nick will feel confident that Nikki’s been kidnapped, so he’ll hope they can catch the culprit before he or she gets too far.

It’s worth mentioning that a candlelight vigil will be held for Nikki this week. That’ll probably be a good time for this apparent abduction to go down. Nikki’s loved ones will gather outside as Tessa (Cait Fairbanks) plays the guitar and leads them in song.

Tessa blackmailed Nikki and later became her kidnapping victim, so this is kind of awkward if you think about it. However, Tessa is trying to make amends and nothing really matters when a life’s on the line anyway. Everyone will just want to come together and pray for Nikki’s recovery.

Unfortunately, the vigil may give our Nikki snatcher a chance to strike. The Young and the Restless spoilers say Nick will have to suck it up and join forces with Rey (Jordi Vilasuso). They’ll hope they can get to the bottom of this before something horrible happens.

Of course, things may not be exactly as they seem. Victor (Eric Braeden) might be behind this since he could be arrested if he shows his face in town. He might even think he has better doctors for Nikki elsewhere. Victor could have a top-notch team lined up for his ailing love.

Then again, there’s always the possibility this will involve someone sinister. J.T. (Thad Luckinbill) could still be alive and if he is, he might use Nikki as a way to draw Victor to the location of his choosing. Whatever the case, this Young and the Restless mystery will bring some bombshells his week and beyond.

Nikki’s kidnapping will distract the rest of the fam, but Reed (Tristan Lake Leabu) will focus on his guilt in the hit-and-run accident. He’ll speak with Rey this week, but it looks like he’ll hold off on his actual confession.

We’ll give you updates as other Y&R news comes in. Stay tuned to the CBS soap and don’t forget to check CDL often for the latest Young and the Restless spoilers, updates, and news.