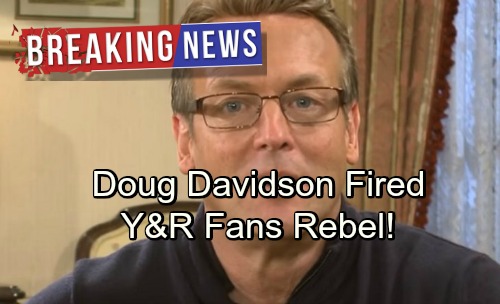 The Young and the Restless (Y&R) spoilers reveal that one CBS soap star’s exit is causing quite a stir. Doug Davidson (Paul) recently lit up social media by revealing some shocking news. Through a series of tweets, he noted that Y&R was heading in a new direction. Davidson expressed disappointment and said it seemed he’d been let go.

The show doesn’t have any plans for Paul and they haven’t for a while now. It’s easy to see why Davidson gave up and reached that conclusion. Of course, this has sparked a larger conversation about how vets are utilized on The Young and the Restless. Many fans are speaking out on Davidson’s apparent firing. They’re also voicing complaints with the show and how it’s being run.

Mal Young, Y&R’s head writer and executive producer, is naturally taking plenty of heat. One viewer tweeted, “The FANS want MAL YOUNG GONE!” Another fan exclaimed, “I am completely shocked! Watch the ratings start to drop…fast!” She added that she was done watching Y&R and noted that it “looks like Eric is not happy as well.”

This fan’s referring to some retweets from Eric Braeden’s (Victor) Twitter account. That’s how he’s choosing to support for his costar and fellow soap vet. One of those retweets said, “I have just learned that the wonderful Doug Davidson has been fired from @YandR_CBS After 40 years! This is a disgrace. Shame on you @CBS You have destroyed this show.”

Since Braeden’s retweeting “destroyed the show” comments, that’s obviously pretty serious. You don’t do that if you’ve just got minor qualms. It’s clear that there’s major unrest behind the scenes, so changes may be brewing. Young’s job could certainly be in jeopardy.

We should also mention that Braeden’s taking a month-long vacation, which may stem from his frustration. Another retweet points to some issues with the writing for Victor. A viewer stated, “I am so unhappy with the writing for Victor I just gotta say. Fangless Victor is not why we watch. Even when I hate the character he is interesting. But they are not doing your character any favours.”

This fan went on to wonder about the reason for the poor writing. She asked, “Who did you piss off? it seems intentional and I am not happy.” Did Braeden get on Young’s bad side? Do they have some beef that’s gone unresolved? Braeden must have some serious sway at the show, so this could be the beginning of the end for Young as head writer and executive producer.