BY Jessica Jones on December 15, 2017 | Comments: one comment
Related : Soap Opera, Spoiler, Television, The Young and the Restless 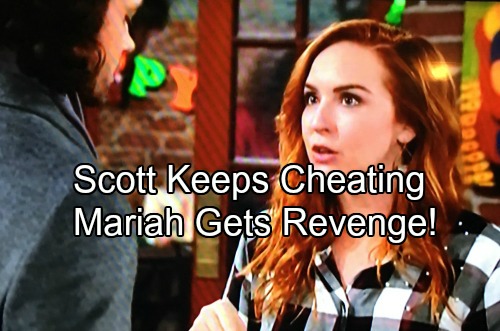 The Young and the Restless (Y&R) spoilers tease that Mariah (Camryn Grimes) will follow through on her promise. After confronting Scott (Daniel Hall) in Friday’s episode, December 15, Mariah warns that she’ll be keeping an eye on him. If Scott dares to cross the line with Abby (Melissa Ordway) again, Mariah will make him pay the price.

Scott will try to focus on Sharon and swear off Abby for good. However, it’s clear that there’s a magnetic pull between Abby and Scott. No matter how hard they try, they can’t seem to fight their attraction to each other.

Perhaps part of Scott is scared of settling down with Sharon and completely committing to one woman. Another part of him just wants to get Abby in the sack again. Nevertheless, Scott will do his best to avoid temptation and she’ll do the same. Abby’s tired of feeling used, so she’ll hope to put an end to all this.

Unfortunately, that plan probably won’t pan out. With a story like this, it’s rare that you start out with a big splash and just let it fizzle. Abby and Scott already had sex, so surely their latest smooch won’t be the end of the cheating. They could easily indulge in one last romp before this is all over.

If not, someone should at least find out about their storage unit sex session. When the news gets back to Mariah, she’s going to hit the roof. Mariah can’t let this go on indefinitely. She’ll want to save Sharon from further heartbreak and make Scott sorry he caused such pain.

Sharon may be reluctant to believe Mariah if she provides updates. She might argue that her daughter has it all wrong. How far would Mariah go to prove her claims? Will she have to record Scott and Abby in a compromising position? Will she get Scott’s confession on tape?

Y&R has some interesting options here. The Young and the Restless spoilers say this storyline will come with a few more shockers. Once Sharon accepts the truth, she might even be on board with a revenge plan. As cohost of a gossip show, Mariah holds great power. She could use it to publicly humiliate Scott and finally give him what he’s got coming.

Hilary (Mishael Morgan) is focusing on positive stories these days, but it’s doubtful she could pass up scoop this hot – especially since a Newman’s involved. Whatever the case, payback could soften the blow for Sharon slightly. Let’s hope she can bounce back from this terrible heartbreak.