The Young and the Restless Spoilers: J.T. Makes a Play for Phyllis – Jealous Billy Loses It 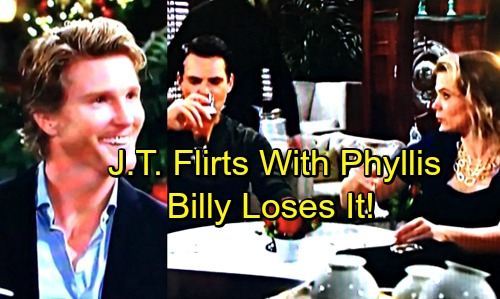 The Young and the Restless (Y&R) spoilers tease that Billy (Jason Thompson) and J.T. (Thad Luckinbell) will have trouble avoiding each other. Naturally, that means they’ll continue to spar. In Friday’s Y&R episode, December 15, Phyllis (Gina Tognoni) has to break up the conflict. Unfortunately, J.T. gets a little flirty – at least according to Billy. The angry Abbott feels like J.T. needs to respect his own marriage.

If J.T. keeps this up, there could be serious drama. The quickest way to get Billy riled is to make a play for Phyllis. He’s very protective of the woman he loves. The Young and the Restless spoilers say Billy and Phyllis will enjoy a pleasant Christmas together, but how long will they be able to keep the peace? All Y&R couples face obstacles, so it’s only a matter of time until another one hits for “Philly.” 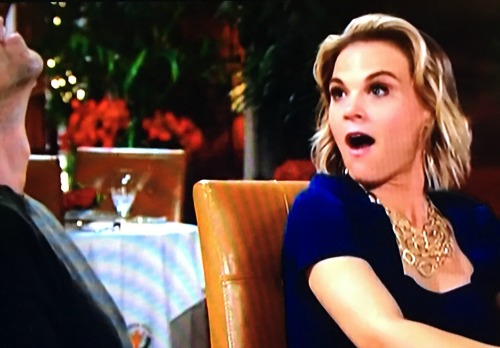 Could J.T. be the latest bump in the road? Billy may be reading too much into J.T.’s behavior, but that wouldn’t change the outcome. If Billy believes J.T.’s crossing the line, you can bet that he’ll intervene. J.T. might even make some passes at Phyllis just to get a reaction out of Billy. The Young and the Restless spoilers state that their rivalry will remain fierce.

It’s always fun with Y&R tosses in some true fight scenes. Billy could easily lose it and start throwing punches. Of course, J.T. wouldn’t just sit back and take it. He’d undoubtedly deck Billy and turn this into a major brawl. Both Phyllis and Victoria (Amelia Heinle) would scold Billy for going off like that. They might argue that J.T’s making things worse by egging Billy on. 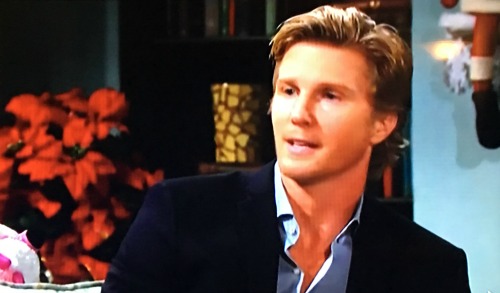 However, it looks like J.T. could be around long enough to find love. Will he cheat on Mac during his stay in Genoa City? Will go after Phyllis or perhaps fall for Victoria again? The Young and the Restless spoilers say Victoria might be the frontrunner at this point. They still share a connection, so you never know when sparks will start flying.

It sounds like this storyline could take a hot turn. We’ll give you updates as other Y&R news comes in. Stick with the CBS soap and don’t forget to check CDL often for the latest Young and the Restless spoilers, updates and news.