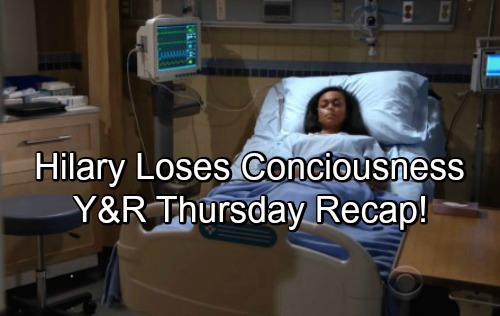 The Young and the Restless (Y&R) spoilers update and recap for Thursday, July 26, tease that Hilary’s (Mishael Morgan) dream will turn into a nightmare. She’ll imagine she’s healthy as she descends the penthouse staircase in a wedding gown. When the officiant starts making a funeral speech, Hilary will wake up startled.

Meanwhile, Devon (Bryton James) will seem glum as he gets ready at home. Neil (Kristoff St. John) will do his best to support him, but this certainly won’t be an easy day. Back at the hospital, Phyllis (Gina Tognoni) will talk to Hilary about the dress she picked. They’ll also discuss Hilary’s hair and makeup, which Devon made arrangements for.

Hilary will note that she hasn’t told Devon what she knows. She won’t want to spend whatever time she has left crying. Hilary will choose to stay silent about her imminent death and just enjoy her wedding.

At Hamilton-Winters, Lily (Christel Khalil) will remain worried about Devon. During a conversation with Cane (Daniel Goddard), Lily will point out that Devon’s going to say heartfelt vows. Hilary will slip away after they make these touching promises, so Lily won’t know how Devon’s going to handle that.

After Cane leaves Lily alone, she’ll have a bit of a breakdown. Lily will sob over her guilt and concern for Devon. Over with Phyllis, she’ll run into Jack (Peter Bergman) at the athletic club bar. As they talk about the wedding, it’ll dawn on Jack that Hilary’s dying. Phyllis will want Billy (Jason Thompson) to be at the nuptials with her, but Jack will vow to be there no matter what.

At Crimson Lights, Mariah (Camryn Grimes) and Tessa (Cait Fairbanks) will nail down their plans. It turns out Crystal (Morgan Obenreder) will be leaving her current location soon, so they have to move fast. Tessa will understand if Mariah wants to change her mind, but Mariah will refuse to throw away their shot.

The Young and the Restless spoilers say Tessa will offer a warning. She won’t think it’s a good idea to tell Sharon (Sharon Case) or anyone else what’s happening. Crystal’s a fugitive, so it’s for the best. Mariah will resolve to attend the “Hevon” wedding, pack up a few things and see Sharon once more before they go.

Back with Hilary, she’ll thank Nate (Brooks Darnell) for giving her a little more time. Hilary will think the fact that he scrubbed in gave her this gift. Y&R spoilers say Neil (Kristoff St. John) will pop in next. He’ll have a sweet chat with Hilary, which ends with them finding closure as family.

Afterward, Hilary will have a little wedding shower. Mariah, Phyllis, Shauna (Camryn Hamm) and Mattie (Lexie Stevenson) will offer some gifts before filing out. Hilary will stop Mariah so they can speak privately. She’ll praise Mariah for being good at what she does and suggest that the show must go on.

Suddenly, Hilary will lose consciousness. A panicked Mariah will rush out to the wedding area for help. The Young and the Restless spoilers say Devon will be by Hilary’s side when she awakens. She’ll assure Devon that she wants to move forward with the wedding.

After Cane gives Lily a pep talk, they’ll head over to the hospital. The nuptials will get underway, so expect plenty of tears and passionate speeches. Devon and Hilary will barely be able to get through their bittersweet vows.

Y&R fans won’t want to miss this emotional episode. We’ll give you updates as other news comes in. Stay tuned to the CBS soap and don’t forget to check CDL often for the latest Young and the Restless spoilers, updates, and news.