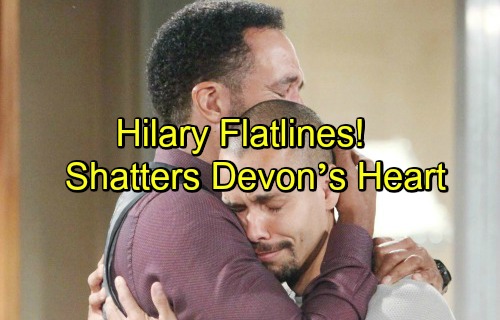 The Young and the Restless (Y&R) spoilers tease that Hilary’s (Mishael Morgan) condition will continue to deteriorate. Nate (Brooks Darnell) warned Devon (Bryton James) that it was time to face the facts and enjoy what little time he has left with his love. As someone who has experience with a tragic loss, Nate just wants Hilary and Devon to get closure.

Fortunately, “Hevon” will indeed have a chance to say goodbye. After their sweet hospital nuptials, Hilary will be overcome with emotion. She’ll be so grateful that Devon was willing to give her something this wonderful. Hilary will realize how much she matters to him and that’ll warm her heart.

However, Hilary may not be able to fight her fight. Despite her best efforts to stay alive, things are about to take an alarming turn. It won’t be long until Hilary’s decline brings some devastating moments. Devon will step out of the room briefly, so perhaps he’ll be thanking the guests in the waiting area. He’ll be glad everyone could come celebrate, even under grim circumstances.

Suddenly, Hilary’s monitors will start beeping. The Young and the Restless spoilers say Devon will rush to her side along with Nate. They may fear that this is the end for poor Hilary. Devon will stoop down close to her and express his love once again. The world will disappear for “Hevon” as they share their final scenes.

Friday’s episode will bring some quiet reflection for Devon and Hilary. She’ll hang on long enough to remember her love story with Devon, which could include some nice Y&R flashbacks. Of course, we can’t rule out the idea of Hilary slipping into a lengthy coma. Still, The Young and the Restless viewers may want to prepare for the worst.

Hilary’s a popular character, so the show may have wanted to give fans plenty of notice. Many Y&R watchers are still upset, but they’ve provided time to make peace with her passing. People have at least accepted that Hilary’s death may conclude her stint.

It also makes sense for Devon to be by Hilary’s side as she fades away. He would certainly be the last person to see her alive. It looks like Hilary may flatline and shatter Devon’s heart into a million pieces.

Y&R’s upcoming episodes are going to be real tear-jerkers! We’ll give you updates as other news comes in. Stick with CBS soap and don’t forget to check CDL often for the latest Young and the Restless spoilers, updates, and news.