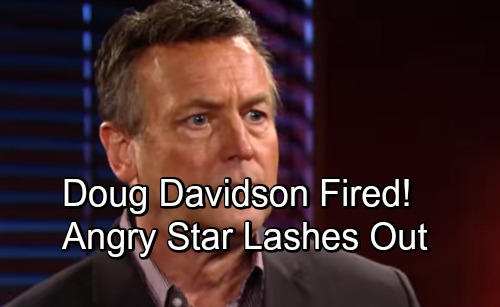 The Young and the Restless (Y&R) spoilers reveal that one CBS soap star could be done in Genoa City. Doug Davidson (Paul) hasn’t been shy about voicing his disapproval on Twitter. He’s spoken out before about his disappointment over the lack of airtime for his character as well as some of the show’s storylines.

Now Davidson’s speaking out again. Unfortunately, it seems things have gotten worse for this actor instead of better. Davidson started out by stating that Y&R is “doing away with history.” He called it “remarkable” that The Young and the Restless isn’t doing more to utilize vets and please longtime watchers.

Davidson made it clear that he was available for shooting, but Y&R apparently isn’t interested in writing for Paul. He also wanted to offer his sincere gratitude to viewers who have come along on his journey. “You all are so wonderful,” Davidson said. “I so appreciate your support and kindness and love. Thanks for a fabulous career.”

Naturally, that statement caused concern for Paul fans. One Twitter user asked, “They haven’t let you go have they??” Davidson’s reply wasn’t encouraging. He revealed that “it seems so” and noted that the show “has a new direction.” It sounds like Davidson would love to shoot more scenes at Y&R, but they don’t have any foreseeable plans for Paul.

Of course, it’s common for daytime drama actors to soap hop. Days of Our Lives has been pleasing both longtime watchers and newer viewers with their latest stories. Could Davidson trade his The Young and the Restless role for one at DOOL? He doesn’t appear to be interested.

When a fan suggested the idea, Davidson was quick to shut it down. “My history and loyalty is with Y&R,” Davidson said. Nevertheless, Davidson is upset over what he seems to view as disrespect. He talked about no longer being included and admitted that “it does hurt, to be honest.”

Davidson finished off his series of tweets by thanking fans for 40 years of love. He acknowledged some individual responses and took time out to complain about Jack’s (Peter Bergman) paternity fiasco. “Poof. Jack isn’t an Abbott? So sad,” Davidson said. He clearly isn’t happy about the writing for Paul and other Y&R staples.

The Young and the Restless spoilers say major drama could be brewing for the cover-up crew, so Paul may have scenes he’s already taped for that. Afterward, what does the future hold for Davidson’s character? According to him, Paul doesn’t have a future at all!

How do you feel about seeing less airtime for soap vets? Would you like to see more of them or you OK with Y&R’s current mix? Should the focus remain on younger characters? We’ll give you updates as other news comes in. Stay tuned to the CBS soap and don’t forget to check CDL often for the latest Young and the Restless spoilers, updates and news.