The Young and the Restless Spoilers: Thursday, August 30 Recap – Surprise Visitor, The Trap is Set and Rey’s Story

BY Olivia Marie on August 29, 2018 | Comments: one comment
Related : Soap Opera, Spoiler, Television, The Young and the Restless 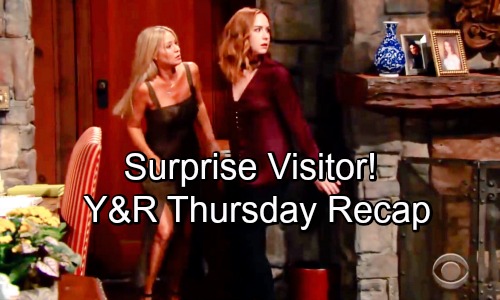 The Young and the Restless (Y&R) spoilers and recap for Thursday, August 30, 2018 reveal Kyle (Michael Mealor) continues to work with his aunt Ashley (Eileen Davidson) in how they are going to stop Billy (Jason Thompson) from destroying their family company, Jabot.

Kyle feels they should be aggressive, while Ashley feels they should be slow and sensitive about it. Kyle firmly believes Billy is simply a self-entitled spoiled brat, while his father, Jack (Peter Bergman) actually had a true addiction; Ashely feels Kyle is being hypocritical, even after he admits he is a bit jealous of his uncle.

Mariah (Camryn Grimes) begins to give up hope on love, telling her mother, Sharon (Sharon Case) how horrible she is at relationships. Mariah takes off to the Dive Bar when Rey (Jordi Vilasuso) comes to the coffeehouse, but instead of getting his free coffee, Sharon grills him. Rey admits it was JT (Thad Luckinbill) that brought him to Genoa City.

When Kyle continues to be a jerk, Mariah leaves saying he’s only going to blow the date anyways. Kyle offers to make Sinead’s IOU vanish if she does this favor for him.

Sharon wants to know why Rey hid the truth from Nick (Joshua Morrow) about his real reason for being in GC. Rey says he isn’t friends with JT, but rather a debt collector, investigating JT’s credit card debts. Sharon reminds him that JT left a lot of debt financially and emotionally in his wake and doubts it can ever be paid. When Rey leaves, she informs all the other women about Rey’s intentions.

Victoria (Amelia Heinle) makes plans to meet Billy to discuss their kids, but he is trying to finish up a meeting with Ashley first. He informs Ashley that there has been a press release about Jaboutiques and there is to be no sabotaging. He reveals that he didn’t tell her anything because he cannot trust her at this point.

After Vicky gets the message from Sharon, she rushes to Crimson, demanding to know what Rey knows about JT. She suggests Sharon makes dinner for Rey and finding out what he knows so they can be one step ahead of him. Victoria returns to her office and finds Billy there, who feels that he is the one who knows her best and asks her to trust him.

Vickie follows him up to the Dive Bar where she quickly admits she is happy he is living back in the family home, so he can spend more time with the kids, but quickly rushes off as he tries to reassure her that she can trust him.

Kyle manages to sneak Sinead out of the Dive Bar before Billy sees them, he hands her a huge envelope of money, saying he will give her the rest when Billy is deep in the red. He has faith she will do this because she loves the challenge and Billy is an old rival. He tells her exactly what he wants done.

Sinead bumps into Billy on the rooftop and casually mentions the massive card tournament that is about to happen and he isn’t very convincing when he claims to not be interested. He wishes her good luck but doesn’t look too happy about it. Sinead says it sure would be fun to beat him one last time!

While Mariah is talking to Rey about his job, Sharon receives a call from security that there is an intruder on the property. Mariah shrieks when she is sure she spots someone. Rey orders the women to hide as he draws his gun and rushes out the door.

Ashley touches a picture of the family when Kyle comes back home. She asks him how his date went, and he pretends it was a waste of his time.

Mariah and Sharon sit on the stairs and worry that Rey is going to figure out that Nick was the one who used JT’s credit cards, but when Rey returns into the house he reveals that he got the problem. He brings in a person – Tessa!