The Young and the Restless Spoilers: Exploding Secrets Push Summer and Billy Together – Hookup Brings Phyllis Fury and Heartbreak 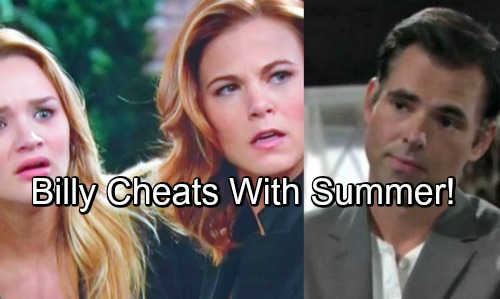 The Young and the Restless (Y&R) spoilers tease that Billy (Jason Thompson) will deal with a tricky dilemma. In Thursday’s Y&R episode, he goes all in at a poker game and loses his brand-new yacht. That thing’s worth a fortune, so giving it up will certainly be a bummer. However, the real problem will be hiding this from Phyllis (Gina Tognoni). She’s obviously going to wonder why “The Jaboat” is gone!

It appears Billy has three options and none of them are ideal. Option one is replacing the yacht, but that’d be a pretty expensive task. Billy could try his luck at the poker table again and attempt to win extra money for it. Obviously, that sounds like a terrible idea. Billy would probably just lose once more. Plus, he’d keep feeding his gambling addiction, which seems to be back in full force.

Option two is lie and hope Phyllis never learns the real story. He might tell her he changed his mind and got his money back for the yacht. That’d spark some suspicions, but Billy may think he can handle them. He’ll be desperate to keep Phyllis in the dark on his gambling drama.

Of course, the best plan would just be to come clean. If Billy confessed and showed remorse, Phyllis would undoubtedly understand. She might be angry at first, but she’d soften soon enough. It’s common for any kind of addict to have moments when they backslide. Phyllis loves Billy, so it’s tough to imagine her turning her back on him over a few poker games.

Sadly, The Young and the Restless fans know Billy doesn’t make great choices. That’s especially true now that Summer’s (Hunter King) in town. She’s clearly been a horrible influence on Billy since she returned. If she hadn’t reentered the picture, Billy never would’ve been drawn back into the gambling world.

There’s a good chance Billy will tell some fibs and set himself up for more trouble. “Philly” could definitely face a major blow. Phyllis is keeping a big secret of her own, but she can be a hypocrite at times. Her cover-up transgressions may not matter. Phyllis’ main issue may be the fact that Billy hid things with manipulative Summer.

After Phyllis inevitably blows her top, Billy should feel awfully low. Will we see Billy’s drunken downward spiral? If so, Summer could make her move. She’ll face Phyllis’ fury as well, so commiserating could lead to lovemaking and a far worse secret!