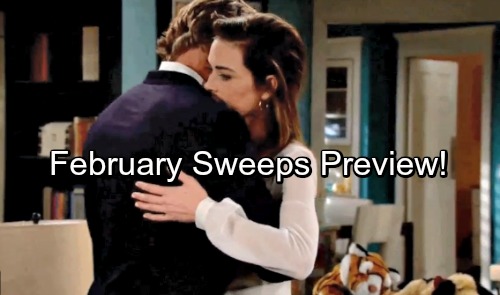 The Young and the Restless (Y&R) spoilers tease that some hot drama’s coming up for February sweeps. All your favorite characters will find themselves in some tricky situations. Let’s look at a preview of the shockers and shakeups ahead.

For starters, Cane (Daniel Goddard) and Lily (Christel Khalil) will face more obstacles. Sam will continue to be a tough issue for this couple. Thankfully, Cane will try to be patient with his wife. He knows Lily’s trying, so he’ll do whatever he can to help her bond with the baby. The effort these two are putting in is commendable.

Y&R fans will also see Nick (Joshua Morrow) and Nikki (Melody Thomas Scott) accomplish some goals. They’re working together on a big project for the homeless. Things will go well, but expect Nikki to struggle with a bombshell eventually. She’ll face a startling dilemma, so stay tuned.

Other Young and the Restless spoilers say J.T. (Thad Luckinbell) and Victoria’s (Amelia Heinle) reconnection will hit a snag. As they try to settle back into their relationship, they’ll realize that’s going to be impossible. If Victoria and J.T. want this to work, they can’t keep living in the past. They certainly have more to discover about each other.

J.T.’s heart problems will also cause some worries for Victoria. The Young and the Restless spoilers say J.T.’s health could take a serious hit sooner or later. Meanwhile, Noah (Robert Adamson) will give Mariah (Camryn Grimes) the cold shoulder. Sharon (Sharon Case) will have to deal with her kids’ crisis, so she should have quite a mess on her hands.

Tessa (Cait Fairbanks) will do her best to make amends with Mariah, but she’ll hit a brick wall. Old wounds will be difficult to move past. Mariah will urge her former friend to stay as far away as possible, but Tessa won’t give up just yet.

Unfortunately, Tessa will also spark more total chaos for Devon (Bryton James). He’ll make the mistake of trusting her again and it’ll ultimately come back to haunt him. Devon will also get involved in Hilary’s (Mishael Morgan) storyline. Her mission to have a baby will draw Devon closer. Will he end up making a kid with Hilary? The plot seems to be moving in that direction.

The Young and the Restless spoilers say Ashley’s (Eileen Davidson) revenge will take Jack (Peter Bergman) by surprise. Ashley will roll up her sleeves at Newman, so the rivalry with Jabot will heat up. Finally, Chelsea’s (Melissa Claire Egan) history will once again stir up trouble. Nick (Joshua Morrow), Sharon, Billy (Jason Thompson) and Phyllis (Gina Tognoni) will all be pulled into the mayhem.

It sounds like some fun stories are in the works. We’ll give you updates as other Y&R news comes in. Stick with the CBS soap and don’t forget to check CDL often for the latest Young and the Restless spoilers, updates and news.