BY Heather Hughes on January 25, 2018 | Comments: one comment
Related : Soap Opera, Spoiler, Television, The Young and the Restless 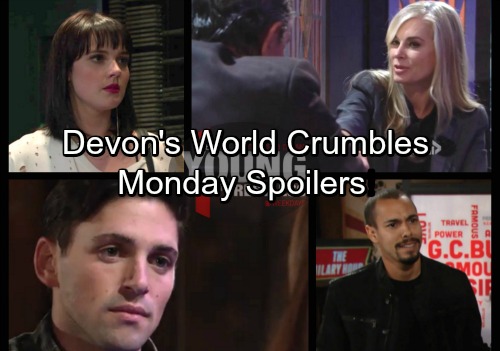 The Young and the Restless (Y&R) spoilers for Monday, January 29, tease that Devon (Bryton James) will get some shocking news. His world will fall apart thanks to this bombshell, so he’d better be ready. This might have something to do with Devon’s big decision on Friday, January 26. Devon drops Tessa (Cait Fairbanks) from his label, but she pleads for another shot.

The record deal is off, but Devon’s going to let Tessa stay at the company. Tessa will pretty much be a lowly assistant now, but at least it’s a paycheck. Of course, all those plans may go out the window soon enough. The Young and the Restless spoilers say Devon’s kindness will prove costly. It looks like his willingness to give Tessa a second chance will come back to bite him.

Tessa will realize there’s probably no hope when it comes to earning Noah’s (Robert Adamson) forgiveness. However, she’ll still want to make things right with Mariah (Camryn Grimes). If Tessa gives an unapproved interview or something along those lines, it could tank the label. Devon’s whole venture could go under if the public learns his first major artist was a thief.

Then again, that drama may come later. Y&R fans know Hilary (Mishael Morgan) is pondering huge life changes. If she reveals that she’s found a sperm donor and is moving forward with her baby plans, that would certainly leave Devon shaken. The thought of Hilary having someone else’s kid is already hitting him hard. The Young and the Restless say Devon may step up to offer his services eventually.

Across town, it appears Ashley (Eileen Davidson) and Victor (Eric Braeden) will make a deal. He presents her with a very attractive offer on Friday, so she may take advantage of it by the time Monday rolls around. Ashley wants to stick it to Jack (Peter Bergman) just as much as Victor does. They could be a great team.

The Young and the Restless spoilers state that Victor and Ashley will put any past issues behind them. They’ll need to fight on the same side now. Unfortunately, Victoria (Amelia Heinle) won’t be happy about Ashley’s new job. Y&R viewers can expect plenty of conflict at Newman Enterprises!

Some fun scenes are coming up in Genoa City. We’ll give you updates as other details emerge. Stay tuned to the CBS soap and don’t forget to check CDL often for the latest Young and the Restless spoilers, updates and news.