The Young and the Restless Spoilers for Next 2 Weeks: Ashley’s Secret Plot – Traci Lashes Out – Victor’s Bombshell Shakes GC

BY Heather Hughes on May 20, 2018 | Comments: 2 comments
Related : Soap Opera, Spoiler, Television, The Young and the Restless 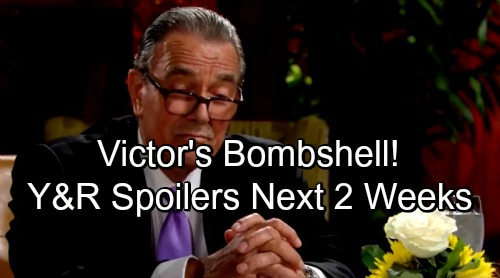 The Young and the Restless (Y&R) spoilers for the next two weeks tease that some fierce battles are on the way. During the week of May 21-25, Nikki (Melody Thomas Scott) and Sharon (Sharon Case) will face another round of conflict. After Sharon reveals that she’s reunited with Nick (Joshua Morrow), she’ll get an earful in return. Nikki won’t be happy about this “Shick” reconnection at all!

Meanwhile, Jack (Peter Bergman) will cause more problems for his family. He’s spiraling out of control, so Ashley (Eileen Davidson) and Billy (Jason Thompson) will try to rein him in. The Young and the Restless spoilers say that plan won’t work out very well. Jack will just lash out again and this time, he’ll go too far.

Billy will try to be kind and understanding, but there’s a limit to how much he’ll endure. Y&R spoilers state that Jack and Billy’s power war will take a downright ugly turn. Perhaps they’ll have a brutal brawl right there in the Jabot office. There’ll certainly be plenty of hurled insults and threats.

Other Young and the Restless spoilers say Ashley’s (Eileen Davidson) secret plot will be revealed. It looks like she’s still got leadership goals of her own. Ashley may let Jack and Billy duke it out until neither one of them’s fit for the CEO spot. She’ll need to get that blood-Abbott clause taken care of ASAP, too.

The week of May 28-June 1 will deliver some tough moments for Kyle (Michael Mealor). Traci (Beth Maitland) will be a bit harsh with him, but it’ll be for his own good. She’ll just want Kyle to be the best man he can be. Traci might scold Kyle for his many mistakes and suggest that he needs to truly respect his family.

Elsewhere, Mariah (Camryn Grimes) will lower her guard and share what she’s dealing with. Could Kyle be the one who listens? Mariah had a warm chat with Kyle after his return home. It’d be nice if they could have a few more scenes together. The Young and the Restless viewers are anxious to see if something might be brewing between them.

Back with Victor (Eric Braeden), he’ll have a secret to divulge. Did he have someone alter he interview footage for him or even change Jack’s paternity test? Could Dina (Marla Adams) have spilled the identity of Jack’s father during her fake date with Victor? Those are options to consider. Victor could also have a doozy of a shocker in store for Jabot. Whatever the case, this secret will be juicy!

Finally, The Young and the Restless spoilers say Abby (Melissa Ordway) and Victoria (Amelie Heinle) will spar. These two can never keep the peace for very long. Victoria and Abby will definitely push each other’s buttons, so stay tuned. We’ll give you updates as other Y&R news comes in. Stick with the CBS soap and don’t forget to check CDL often for the latest Young and the Restless spoilers, updates, and news.