BY Marcy Cohen on May 19, 2018 | Comments: one comment
Related : Soap Opera, Spoiler, Television, The Young and the Restless 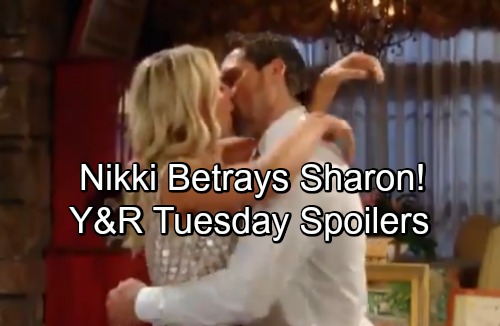 The Young and the Restless (Y&R) spoilers for Tuesday, May 22, tease that Nick (Joshua Morrow) and Victor (Eric Braeden) will exchange big news. First, Nick will fill his dad in on some developments in his love life. He’ll reveal that he’s back together with Sharon (Sharon Case), so Victor will have a chance to weigh in.

It turns out Victor will be fine with Nick and Sharon’s reunion. He’ll sense that Nick’s on solid ground again, which is good since he went through so much drama with Chelsea (Melissa Claire Egan). The Young and the Restless spoilers say Victor will realize Nick’s happy and that’s all that matters.

Next, it’ll be Victor’s turn to drop a bomb. He’ll surprise Nick by pushing for his return to Newman Enterprises. Victor will insist that he needs Nick to pitch in and support the family business. He’ll make Nick a tempting offer and hope that it’s accepted.

Now that this father and son are on better terms, it could make it easier for Nick to get on board. However, he doesn’t have all the facts. Y&R spoilers say Victor has a hidden agenda as usual. He needs Nick at Newman to help out with his sneaky plan. Will Nick fall for his dad’s manipulation? It certainly looks that way! By the time Nick knows what’s up, he may already be in over his head.

Other Young and the Restless spoilers say Jack (Peter Bergman) will face more family drama. He won’t be pleased over the changes at Jabot. Jack and Billy (Jason Thompson) will soon clash over the CEO switch. Of course, Jack’s to blame for this mess since he put the blood-Abbott clause in place. If he hadn’t played dirty with Ashley (Eileen Davidson), he could’ve stayed in charge.

Nevertheless, Jack will do his best to regain control of the situation. He’ll stir up plenty of trouble in the process. Meanwhile, Y&R spoilers state that Nikki (Melody Thomas Scott) will be pushed to her limit. The “Shick” reunion updates will lead to quite a feud. Sharon will be stunned by Nikki’s next move, so stay tuned to watch their war heat up.

It sounds like some fantastic scenes are on the way. We’ll keep you posted as other Y&R details emerge. Stick with the CBS soap and don’t forget to check CDL often for the latest Young and the Restless spoilers, updates and news.