BY Heather Hughes on April 19, 2018 | Comments: one comment
Related : Soap Opera, Spoiler, Television, The Young and the Restless 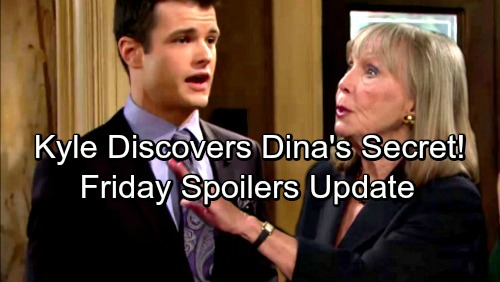 The Young and the Restless (Y&R) spoilers for Friday, April 20, tease that Victor (Eric Braeden) will get on Nikki’s (Melody Thomas Scott) bad side. He’ll refuse to spend another night in the hospital, so he’ll arrange for a doctor at the ranch. That news will infuriate Nikki, but not as much as Helen’s (Sitara Hewitt) arrival. Victor’s mistress will be taking him home and Nikki won’t be happy about it!

Victor will be equally outraged over Nikki’s hookup during his attack. He’ll push for the guy’s name, but Nikki won’t budge. At the coffeehouse, Sharon (Sharon Case) will get a shocking message from Nick (Joshua Morrow). He’ll text her about meeting in the Chancellor Park garden. Sharon will start to panic, but Phyllis (Gina Tognoni) will urge her to calm down and see if Nick knows anything.

When Sharon meets up with Nick, he’ll mention his regrets. Nick left Sharon out of the loop on their last project meeting. This time Nick will want to do things right. He’ll bring up the vegetable garden he wants to plant and ask what Sharon thinks about it.

Sharon will think they should chat somewhere else. They’ll make their way to Crimson Lights and join Phyllis. The Young and the Restless spoilers say Sharon will comment on Nick’s plans for the garden. Phyllis will stir up suspicion by chuckling nervously and asking questions.

Nevertheless, talk will eventually turn to J.T. (Thad Luckinbell). Phyllis will urge Nick to stop his search since finding J.T. would mean a trial and more pain for Victoria (Amelia Heinle). At home with Sharon, Nick will suggest that maybe Phyllis has the right idea. He’ll be glad that J.T.’s long gone.

Other Y&R spoilers say Kyle (Michael Mealor) will make another pitch. He’ll show up at the Abbott mansion with packed bags and ask if there’s room for him. Dina (Marla Adams) will be on board with the idea. Jack (Peter Bergman) will think it’ll be easier to watch Kyle this way. It’ll take some convincing, but Ashley (Eileen Davidson) will allow Kyle to move in.

Later, Abby (Melissa Ordway) will tell Ashley that she kept the memory card from Dina’s interview. It contains the paternity secret, so Ashley will believe they should burn it. Unfortunately, Kyle will wonder why there’s a fire when it’s so warm out. He’ll poke around and dig out the memory card.

At the ranch, Jack will show up just as Helen’s leaving. He’ll suspect that she’s been spying for Victor, but Nikki will note that Helen is his mistress. Jack will announce that he intends to fire Helen, so he’s obviously over all this drama.

Afterward, Jack will confront Victor about the emails he found. He’ll be livid over Victor’s partnership with Kyle. The Young and the Restless spoilers say Jack will make some fierce threats in Friday’s episode. He’ll make it clear that he won’t tolerate Victor going after his company. If Victor goes after Kyle, Jack will promise total destruction.

It sounds like Jack means business! We’ll give you updates as other Y&R details emerge. Stay tuned to the CBS soap and don’t forget to check CDL often for the latest Young and the Restless spoilers, updates and news.