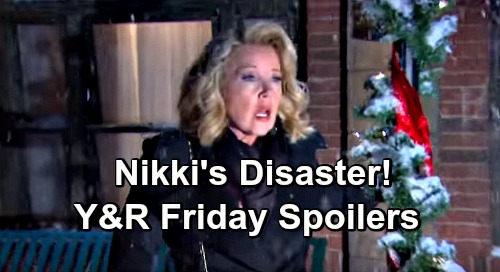 The Young and the Restless (Y&R) spoilers for Friday, December 14, tease that Jack (Peter Bergman) and Kerry (Alice Hunter) will play an interesting game of pursuit. It’s clear that there’s a spark between them, but they can’t seem to get on the same page. Kerry bailed without warning during her post-Thanksgiving chat with Jack. She also accepted a date recently and stood him up.

Jack wants to get to know Kerry, but she always finds ways to avoid spending time with him. It looks like he may continue to give her the cold shoulder, so Kerry may have to do the pursuing for a while. Of course, Kerry may surrender if Jack puts up too much of a fight. She could turn the tables again and make Jack step up his efforts after all.

Jack and Kerry will keep going around in circles, but they’ll eventually drop all the drama. They’ll realize they both want a real date, so Sharon’s (Sharon Case) upcoming Christmas party will provide the perfect opportunity. For now, Sharon won’t be feeling the holiday love from Mariah (Camryn Grimes). She’ll face her daughter’s wrath for letting her partners in crime torment Tessa (Cait Fairbanks).

As they clash over Victoria (Amelia Heinle) and Nikki’s (Melody Thomas Scott) kidnapping plot, a startling truth will come out. Sharon (Sharon Case) will admit she can no longer support Mariah’s relationship. She previously suggested she’d understand if Mariah got back together with Tessa, but she won’t be so understanding now that it’s a done deal.

Mariah will contend that Sharon can disapprove if she wants, but she’ll warn her to leave Tessa alone. Sharon will fire back that she can’t do that until Tessa is out of Mariah’s life for good. She’ll want to protect her daughter, but Mariah will think Sharon and her posse have become the real monsters here.

Over with Nikki, it looks like she’ll be on the hot seat again. Rey (Jordi Vilasuso) will have more questions and that could be because of Nikki’s plan to get closer to Mia (Noemi Gonzalez). In Thursday’s episode, Nikki seeks Mia’s help and drops hints about getting Rey off Victor’s (Eric Braeden) back.

However, this Y&R scheme could easily backfire. Rey may sense that he’s on the right track and put even more pressure on Nikki. The Young and the Restless spoilers say Nikki’s stress level will skyrocket on Friday, so she’ll keep drinking and set up some dangerous shockers.

A recent preemption likely bumped the usual Friday cliffhanger to a Y&R episode next week, December 17-21, but it’ll be worth the wait. Nikki’s drunken night will end with her getting run over and rushed to the hospital, so total chaos is ahead. We’ll give you updates as other Young and the Restless news comes in. Stick with Y&R and don’t forget to check CDL often for the latest Young and the Restless spoilers, updates and news.