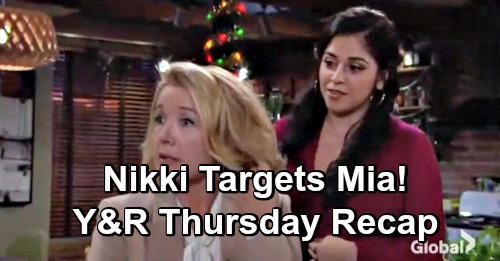 Later, Reed will reconvene with Victoria and suggest that she should’ve been honest with him. She’ll be impressed with how much Reed has matured, but he’ll gripe that Cane (Daniel Goddard) doesn’t understand that. Victoria will promise to help with Mattie’s (Lexie Stevenson) father if she can.

Across town, Mariah (Camryn Grimes) will wake Tessa (Cait Fairbanks) up from a nightmare at their apartment. She’ll fret over how traumatized Tessa was by the kidnapping, but Tessa will halt the discussion and leave to get some air. When Tessa returns, Mariah will insist that Tessa has to talk about this. She’ll suggest going to Sharon (Sharon Case) for help, so Tessa will have to reveal the whole truth.

Once Tessa admits Sharon was part of the kidnapping posse, Mariah will fume. Tessa will point out that Sharon didn’t seem like she wanted to be there, but Mariah won’t think it matters. She’ll rant about how Sharon’s a social worker who helps battered women. Despite Tessa’s attempts to settle the situation, Mariah will refuse to let Sharon off the hook.

At Crimson Lights, Lola (Sasha Calle) will tell Mia (Noemi Gonzalez) about her catering gig. She’ll mention Devon’s (Bryton James) name, which will leave Mia impressed. Y&R spoilers say Mia will soon dash off for an influential meeting of her own. It turns out Nikki (Melody Thomas Scott) will hope to butter Mia up for the sake of the investigation.

Nikki will turn down a cocktail when she arrives at Mia’s place. She’ll let Mia do her makeup and suggest that she could provide some Genoa City connections – if Rey wasn’t so focused on Victor. Nikki will even imply that she could pull some strings and have Rey fired. She’ll hint that maybe Mia could learn more and help her put an end to all this, so Mia will agree to try.

After Mia steps out for a moment, Nikki will slip some vodka in her own coffee cup. She’ll take a drink and continue falling off the wagon. Before Nikki leaves, she’ll chat Mia up a bit more and contend that this could be a mutually beneficial relationship.

At Devon’s penthouse, he’ll prepare for a wonderful meal with Ana (Loren Lott). Devon will look forward to the food of the chef Abby’s (Melissa Ordway) hyping. Of course, Abby won’t tell Devon that Lola’s doing the cooking. Despite a minor hiccup with Fen (Zach Tinker) pushing his demo, the dinner will be a success. Devon will want to meet this amazing chef, so he’ll be surprised when it’s Lola.

The Young and the Restless spoilers say Abby will admit she played them both. Nevertheless, the food will speak for itself. Devon and Lola will make the deal, so Abby will be over the moon. Back at the coffeehouse, Victoria will find Cane and urge him to let their teens support each other. She’ll insist that Reed’s grown up a lot, so Cane will soften on the idea.

Victoria will also provide encouragement as the holidays approach. She’ll know it’ll be tough without Lily (Christel Khalil), but she’ll convince Cane to get in the Christmas spirit. He’ll return home with a Christmas tree and ornaments, which will leave Charlie (Noah Alexander Gerry) and Mattie pleased.

Finally, Nikki will fill Victoria in on her Mia plan. The news will immediately leave Victoria fearful. If Nikki isn’t careful, she could become Rey’s next major suspect! We’ll give you updates as other Young and the Restless details emerge. Stay tuned to Y&R and don’t forget to check CDL often for the latest Young and the Restless spoilers, updates and news.