BY Heather Hughes on December 27, 2018 | Comments: one comment
Related : Soap Opera, Spoiler, Television, The Young and the Restless 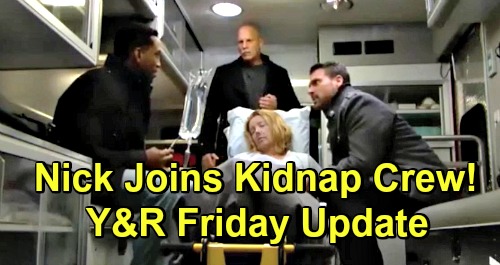 The Young and the Restless (Y&R) spoilers update and recap for Friday, December 28, tease that Nikki Newman’s (Melody Thomas Scott) disappearance will bring panic. Nick Newman (Joshua Morrow) will file a missing person’s report as quickly as possible. It won’t be long until Rey Rosales (Jordi Vilasuso) waltzes in and insists he’s going to get some answers.

Nick will blast Rey for making promises he hasn’t been able to keep. He’ll be fed up with stalled investigations, but Rey will just focus on the task at hand. While Nick puts the Newman security team to work, Rey will make a secret phone call. He’ll tell the person on the other end that he wants Nick tracked, so this detective must have some suspicions.

In an ambulance, Dr. Nate Hastings (Brooks Darnell) will grow concerned about Nikki. She’ll be unconscious again, so Nate will push his driver to hurry up. He’ll note that Nikki’s getting weaker, so the situation is dire.

Once Nikki awakens, she’ll get confirmation that Victor Newman (Eric Braeden) came to see her. Nikki will contend that Victor’s love brought her out of her coma.

Nate will bring up the J.T. Hellstrom (Thad Luckinbill) accusations, so Nikki will get agitated. She’ll maintain that Victor was set up before losing consciousness again. Y&R spoilers say Nate will have to make a fast decision. He’ll determine that Nikki needs meds back at the hospital, so he’ll force the driver to turn around.

In the waiting area, Nick will bicker with his sister. Victoria Newman (Amelia Heinle) will object when Nick badmouths Victor and his choice to stay away. Nick will think some foe of Victor kidnapped Nikki, but Victoria will be sick of all the trash talk.

Afterward, Victoria will corner Phyllis Summers (Gina Tognoni) and suggest that they can’t keep holding back. She’ll declare that they’re going to confess everything tonight, but she’ll face resistance.

Phyllis will argue that if the kidnapper wanted Nikki dead, it wouldn’t have gone down like this. Nikki could’ve just as easily been killed right in her room, so Phyllis will urge Victoria to keep quiet.

At the police station, Nick will make an admission. He’ll confess that he’s truly worried about Nikki and has been taking it out on Rey. The Young and the Restless spoilers say Rey will hand over a cup of coffee and let Nick help him. He’ll think they need to look through the hospital visitor logs and see if anything stands out.

Rey will talk to Nick about his own disappointing father and add that there’s always some love under the surface. Nick will feel like Rey’s got an ulterior motive, but Rey will insist that’s not the case.

Soon after, video footage will show someone posing as an orderly in Nikki’s room. Rey will note that the kidnapper avoided most of the security cameras, so he’ll assume it’s someone who works there.

Back at the hospital, Nick will spot a masked Nate and put it all together. He’ll be furious, but Nate will point out that he did this for Victor. He’ll add that Nikki has relapsed and needs drugs right away.

The Young and the Restless spoilers say Nick will head out to the ambulance with Nate. This fearful son will want Nikki taken back inside the hospital, but the driver will insist it’s not happening.

It sounds like Nick will just have to go along for the ride! We’ll give you updates as other Y&R news comes in. Stick with the CBS soap and don’t forget to check CDL often for the latest Young and the Restless spoilers, updates, and news.