The Young and the Restless Spoilers: Billy’s Messy Romantic Path – Which Woman Is His Best Match?

BY Marcy Cohen on December 27, 2018 | Comments: one comment
Related : Soap Opera, Spoiler, Television, The Young and the Restless 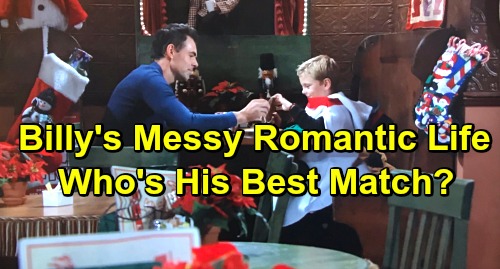 The Young and the Restless (Y&R) spoilers tease that Billy Abbott (Jason Thompson) will be looking for love in the new year. However, the path to it could bring interesting twists and turns. Billy screwed up big time by hopping in bed with Phyllis Summers’ (Gina Tognoni) daughter. He used Summer Newman (Hunter King) for revenge and wrecked his chance at a “Philly” reunion – or did he?

Y&R fans should know by now to never say never on a soap. Of course, Phyllis and Billy were getting pretty stale just before their split. All they ever did was have sex and that’s not enough to keep a solid love story going.

That said, they had some smoking chemistry and they understand each other better than anyone else. Phyllis and Billy seem destined to get back together eventually. It’s just a matter of when Phyllis will forgive and move past Billy’s actions. Jealousy could certainly move that process along!

Perhaps Billy and Phyllis can build something stronger and deeper the next time around, but Billy’s inching toward Victoria Newman (Amelia Heinle) right now? She’s another ex that he always gravitates toward. It’s a no-brainer since their kids keep them so connected. Victoria knows Billy messes up sometimes, but she can see his good heart underneath all that. His support has definitely meant a lot to her lately.

The Young and the Restless spoilers say Victoria and Billy will grow closer, but reservations will hold Vikki back. She’s had enough “Villy” reunions to know how this is going to turn out. Still, the hopeless romantic in Victoria will wonder if they could have a shot. Their bliss may be short-lived if they cross back into romantic territory, but it might be worth pursuing anyway.

There’s another pairing option for Billy that many fans think is going to waste. He cooked up a plot to make Nick Newman (Joshua Morrow) and Phyllis envious a while back. It involved making Sharon Newman (Sharon Case) his date and they looked quite good together. Case is one of those magic cast members who has chemistry with just about any costar, so it’s not surprising that they worked.

The Young and the Restless appears to be gearing up for a Rey Rosales (Jordi Vilasuso) and Sharon pairing, but is that really the way to go? Some Y&R viewers would prefer Billy and Sharon. They had a lonely broken hearts club going at one point and it was easy to imagine that friendship growing into more.

It seems likely that Billy will reunite with Victoria before ultimately getting back together with Phyllis. Nevertheless, we want to know your pick for Billy’s best match. Would you like to see him with Victoria, Phyllis, Sharon or someone else? We’ll give you updates as other Y&R news comes in. Stick with the CBS soap and don’t forget to check CDL often for the latest Young and the Restless spoilers, updates and news.