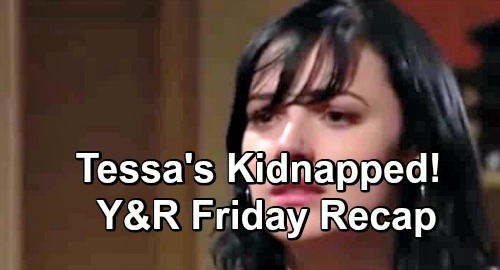 The Young and the Restless (Y&R) spoilers update and recap for Friday, December 7, (note this show was meant to air on Thursday, December 6, but since Wednesday’s Y&R was preempted it is currently scheduled for Friday) tease that Ana (Loren Lott) will support Devon (Bryton James). He’ll be a mess thanks to his anxiety attack, but he’ll try to pull himself together for Rebekah Barlow. In a moment alone, Ana will find the pills Devon’s shrink prescribed. He won’t want to take any, but Ana will insist that they could help him through this.

Once Devon and Ana return to Rebekah, they’ll work out an agreement. Since Rebekah really wants to meet the artist Devon’s pushing, Ana will arrange a video chat. The Young and the Restless spoilers say the chat will go well, so Rebekah will ultimately make the deal.

Once Rebekah heads off to another meeting, Devon will discuss his new prescription with Ana. She’ll be sorry if she invaded his privacy, but she saw them by mistake. Ana will mention how those same meds helped her friend. She’ll want to be there for Devon whenever he needs someone to turn to.

Meanwhile, Rey (Jordi Vilasuso) will clash with Nikki (Melody Thomas Scott) and Victoria (Amelia Heinle). He’ll feel like they’re keeping secrets, but they’ll just focus on Victor (Eric Braeden). Victoria and Nikki will argue that Victor isn’t to blame for J.T.’s (Thad Luckinbill) murder, but Rey will wonder how they can be so sure.

Other Young and the Restless spoilers say Mariah (Camryn Grimes) will continue to shut Tessa (Cait Fairbanks) out. She’ll eventually meet back up with Kyle (Michael Mealor) and admit she’s scared of walking away. Mariah won’t know if she’ll ever find someone else, but Kyle will think that’s ridiculous. He’ll praise Mariah’s many great qualities and convince her it’s OK to let go.

Mariah will decide to break up with Tessa, so she’ll ask her to meet via text. Tessa will text back that she’s on her way, but a shocker will change everything. Someone will snatch Tessa from behind as she’s exiting the apartment. A black bag will go over her head as Tessa drops her keys to the floor.

Back with Nikki, she’ll nearly sneak a drink. Victoria will enter just as Nikki’s about to drown her concerns, so she’ll pour the liquor in a flowerpot. Sharon (Sharon Case) will show up moments later, so she’ll get updates on the latest evidence and they’ll all discuss their theories.

Nikki will consider the idea that Jack’s (Peter Bergman) trying to get revenge on Victor. However, Sharon will have another startling suggestion. She’ll wonder if Phyllis (Gina Tognoni) returned to Chancellor Park and somehow moved the body. Sharon will point out that Phyllis hates Victor and would have a motive to frame him.

Victoria and Nikki will immediately argue that Sharon’s not making any sense. Y&R spoilers say Nikki will finally contend that there’s only one person left. She won’t reveal his or name just yet, but perhaps she’ll be talking about J.T. himself. Then again, Nikki might think Rey’s that desperate to put Victor away.

Over with Nick (Joshua Morrow), he’ll agree to a “date” with Rebekah for Phyllis’ sake. Things will get tricky when Rebekah turns up the heat. In a suite at the athletic club, she’ll change into lingerie and postpone signing the contracts. Nick will have to decide how far he’s willing to go for business!

Elsewhere, Phyllis and Billy will express remorse for their actions. They’ll discuss all the drama that went down, including Billy’s hookup with Summer (Hunter King). Billy will wish he could take it back, but it’s too late. The Young and the Restless spoilers say Phyllis will wonder if Billy wants another shot. He’ll ask her the same thing, but Phyllis will ultimately decide Billy should go.

It sounds like there’ll be even more complications for “Philly” soon. We’ll keep you posted as other Y&R news comes in. Stay tuned to the CBS soap and don’t forget to check CDL often for the latest Young and the Restless spoilers, updates and news.