The Young and the Restless Spoilers: Friday, July 27 – Hilary Reflects with Devon Before Her Death – Victor’s Devious Plan 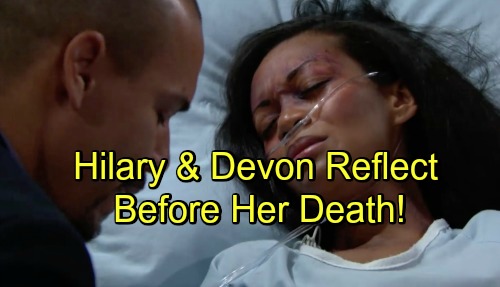 The Young and the Restless (Y&R) spoilers for Friday, July 27, tease that Devon (Bryton James) and Hilary (Mishael Morgan) will enjoy fleeting joy as newlyweds. They won’t have long to bask in the afterglow of their wedding, but they’ll still squeeze in a few memories. Devon will want to reflect on all the moments of their journey together. He’ll talk about his great love for Hilary as they think back.

Hilary will be pretty weak at that point, but she’ll keep fighting. She won’t want to die any sooner than she has to. Hilary will be determined to stick around long enough for a proper goodbye. This time of reflection will serve as the perfect “Hevon” farewell. Y&R will give this couple an emotional sendoff before Hilary’s dreaded demise arrives.

There’s a good chance Hilary will slip away while she’s alone with Devon. That’d be both peaceful and heartbreaking, so the show might as well take that route. According to new Young and the Restless spoilers, Hilary will indeed face a deadly exit. Many fans were holding out hope for another outcome, but Y&R wants the drama this death will bring.

Devon will head down a dark path soon, but he’ll feel only grief as Hilary dies in front of him. His crushing sadness will be almost too much to bear. This is shaping up to be a grim Friday cliffhanger, so viewers will definitely want to tune in. As devastating as all this is, the Y&R cast is knocking it out of the park!

Elsewhere, Victor (Eric Braeden) will carry out a devious plan. It seems likely that he’ll target Nick (Joshua Morrow), who’s been swooping up Newman contracts and employees. Victor will inevitably want to show his son who’s boss. He won’t think Dark Horse can handle what he has in store, so Nick had better watch out! The war is on and that means some shockers are brewing in Genoa City.

However, The Young and the Restless spoilers say Nick will remain a formidable foe. He’ll continue his efforts to seek revenge and make Victor sorry he ever messed with him. We’ll give you updates as other Y&R news comes in. Stay tuned to the CBS soap and don’t forget to check CDL often for the latest Young and the Restless spoilers, updates, and news.