The Young and the Restless Spoilers: Friday, July 27 Recap – Devon Holds Hilary as She Dies – Punches Fly for Nick and Billy 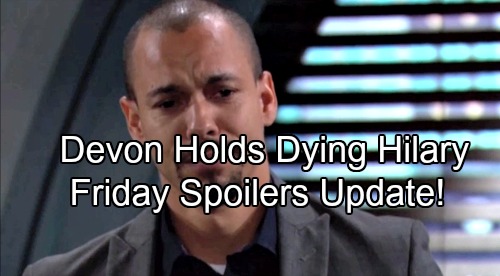 The Young and the Restless (Y&R) spoilers update and recap for Friday, July 27, tease that Devon (Bryton James) and Hilary (Mishael Morgan) will share their final scenes together. At the hospital, Devon will talk about big plans for the future. He’ll try to keep Hilary’s spirits up, but she’ll want to be realistic. They don’t have much time left, so they can’t leave anything left unsaid.

Hilary will be grateful for their beautiful wedding and the chance to be Devon’s wife again. Devon will assure Hilary that he’s hers forever. The Young and the Restless spoilers say Hilary will bring up Shauna (Camryn Hamm) and urge Devon to look out for her. She’ll need him after she’s gone.

Hilary will also push Devon to celebrate her life and move on with someone new. She won’t want him to mourn forever. Y&R fans will see some “Hevon” flashbacks as they reflect on their great love. Devon will recall a story Hilary once told him and when he’s finished telling it, he’ll see that Hilary has died in his arms.

While Devon cries over the loss, Mariah (Camryn Grimes) will pack her things and get ready to leave town. When Nick (Joshua Morrow) stops by the cottage, Mariah will hide her bags. They’ll talk about Hilary and Devon’s wedding before shifting to Nick’s relationship with Sharon (Sharon Case). He’ll want Mariah to know she’s an important part of their family.

At the coffeehouse, Tessa (Cait Fairbanks) will have a deep conversation with Sharon. She’ll promise that she’s been completely honest with Mariah. They’re done with all the secrets. By the time Sharon returns home, she’ll feel good about where things are headed for Mariah and Tessa.

The Young and the Restless spoilers say Mariah will sneak out and get in the car with Tessa. However, she’ll reveal that she changed her mind. Mariah can’t leave her loved ones in Genoa City, so Tessa will have to find Crystal (Morgan Obenreder) alone. They’ll break down in tears as they share a farewell kiss.

It’s worth noting that Cait Fairbanks confirmed she’s not leaving. Y&R’s head writer and executive producer, Mal Young, also indicated that Tessa would be sticking around. It sounds like Tessa will return after she searches for her sister, so stay tuned for more drama.

In the meantime, Victor (Eric Braeden) and Victoria (Amelia Heinle) will seek Nikki’s (Melody Thomas Scott) help. They’ll convince her to take a position at Newman, which will irk eavesdropping Nick. Jack (Peter Bergman) will also bicker with Billy (Jason Thompson) in Friday’s episode. He’ll give his brother an earful for not supporting Phyllis (Gina Tognoni) at the wedding.

Later, Nick and Billy will face off as well. They’ll spar as Nick hints that he might steal Fenmore’s. He’ll also give Billy a hard time about his gambling addiction, so it won’t be long until punches fly. Once they finally separate, The Young and the Restless spoilers say Nick will offer a warning. He won’t think he’s the kind of guy Billy wants to go up against.

Y&R viewers won’t want to miss the shockers ahead. We’ll give you updates as other news comes in. Stick with the CBS soap and don’t forget to check CDL often for the latest Young and the Restless spoilers, updates, and news.