BY Heather Hughes on June 21, 2018 | Comments: one comment
Related : Soap Opera, Spoiler, Television, The Young and the Restless 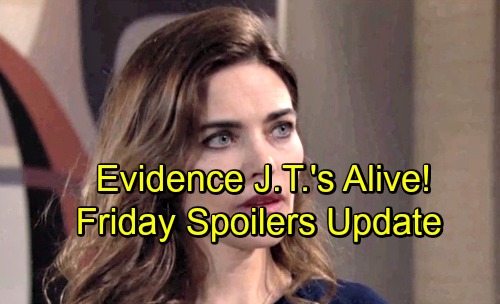 The Young and the Restless (Y&R) spoilers for Friday, June 22, tease that Victor (Eric Braeden) will have some strong suspicions. He’ll feel like J.T.’s (Thad Luckinbill) behind Newman’s latest threat. However, Victor will decide to leave the cops out of this for now. He’ll think they should monitor the situation on their own.

Later, Victoria (Amelia Heinle) and Abby (Melissa Ordway) will gab about Nick’s (Joshua Morrow) upcoming party. When Victoria brings up Arturo (Jason Canela), Abby will get cranky. She’ll make it clear that Arturo’s not her boyfriend. The sisters will also discuss Christian (Jude and Ozzy McGuigen) and eventually, Reed (Tristan Lake Leabu). Abby will hope the teen gets some closure on J.T.

Suddenly, Mac (Kelly Kruger) will show up to see Victoria. After Abby heads out, Mac will deliver some surprising info. One of J.T.’s old credit cards was used. It was swiped for things like hotels, rental cards and meals. In other words, all the purchases line up with a man fleeing from police.

Mac will note that the card was last used in Iowa. She’ll mention that Paul’s (Doug Davidson) already in the loop and add that she hopes they find J.T. Mac needs that sense of finality and she’d like to see Victoria get some justice. After talking about their kids, Mac and Victoria will share a warm embrace.

Other Young and the Restless spoilers say Nick and Sharon (Sharon Case) will prepare for a party. They’ve invited their loved ones to help celebrate their engagement, but Sharon will have some fears. She’ll think they should get ready for a bit of backlash, but some people will definitely be on board.

Mariah (Camryn Grimes) will congratulate the happy couple before the shindig. She’ll let Sharon and Nick know that they deserve to have Christian in their lives. Mariah will get emotional and they’ll all bring it in for a hug. Meanwhile, Billy (Jason Thompson) will be running late for work. He’ll let Summer (Hunter King) know that she can’t say anything about their poker game last night.

Billy will admit to his former gambling addiction and suggest that he should’ve have caved in. Summer will promise to keep her mouth shut, but this is certainly a risky situation. After Phyllis arrives, she’ll question why Billy isn’t at the office. He’ll talk about getting a late start and kick a stray poker chip out of sight. Once she’s alone, Summer will have a manipulative look in her eye.

At The Dive Bar, Nikki (Melody Thomas Scott) will greet Nick and apologize for Victor’s actions. She’ll be sorry that Vic took his Christian quest this far. Nick will hate that Nikki’s caught in the drama, but he’ll be glad she could attend his party.

Soon after, Abby will have updates for Victoria. She’ll mention that J.T.’s credit card shipped those boxes from Iowa. Victoria will promptly fill in the rest of the cover-up crew. Phyllis, Sharon and Nikki will insist that there’s no way J.T. could be alive.

Finally, Nick will reveal the reason for this gathering. He’ll announce his engagement to Sharon just as Victor walks over. Y&R spoilers say Vic will be pleased by the news. He’ll think Nick just guaranteed that he won’t get Christian back. Nevertheless, Nick will assure Victor that his boy’s coming home.