The Young and the Restless Spoilers: Friday, March 30 Update – Jack’s DNA Results In, Not John’s Son – Victor Offers a Clue 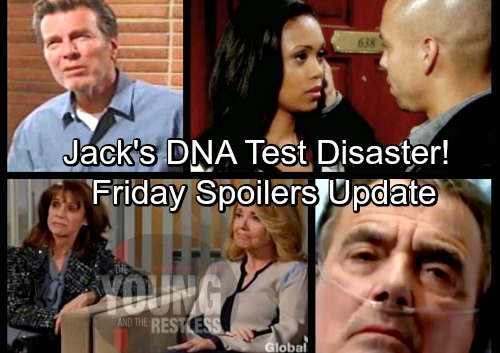 The Young and the Restless (Y&R) spoilers for Friday, March 30, tease that Victor (Eric Braeden) will face plenty of questions from Ashley (Eileen Davidson). She’ll want to know if he can recall the night of his assault. Ashley will wonder if Victor knows who hurt him, but he’ll just mutter about something he has to tell Victoria (Amelia Heinle).

Before Victor can say anything more, Victor’s monitors will go nuts. He’ll have to be rushed into surgery for bleeding in his brain. Meanwhile, Jack (Peter Bergman) will look glum as he poses for his mugshot. When Michael (Christian LeBlanc) hears about the hard drive Paul (Doug Davidson) found, he’ll tell Jack to keep his mouth shut.

The next morning, Ashley will fill everyone in on her brief chat with Victor. She’ll suggest that he had news for Victoria. The Young and the Restless spoilers say Victoria will wonder why Ashley even came to the hospital. They’ll get into a heated argument over Victor as well as Newman Enterprises.

Suddenly, Victor’s ex-wife will appear. Meg Bennett will reprise her role as Julia Newman for Friday’s Y&R episode. Julia will mention that she heard the reports of Victor’s attack. She’ll catch up with Nikki and offer some support.

Later, Victor’s doctor will reveal that the surgery was a success. However, he’ll warn that Victor isn’t out of the woods just yet. Meanwhile, Kyle (Michael Mealor) will annoy Billy (Jason Thompson) by acting like Jack’s guilty. Billy will point out that Kyle’s the one who’s been plotting with Victor. He’ll think Kyle’s quite the traitor.

In the jail visiting area, Kyle will have a tense meeting with Jack. After Kyle brings up the surgery, Jack will wonder if Victor’s going to make it. Kyle will suggest that Jack’s worried about harsher charges. The father and son will bicker about Ashley’s pain over the blood-Abbott clause. Kyle’s secret partnership with Victor will also spark some conflict.

Over with Ashley and Abby (Melissa Ordway), they’ll learn the DNA results are back. When they open them up, they’ll be shocked. Y&R viewers won’t see what the results say just yet, but we’ll go ahead and give you the scoop. The test will reveal that Jack’s not an Abbott, so that’s a big deal. Whether it sticks or not, the bombshell will lead to chaos.

At Hamilton-Winters, Cane (Daniel Goddard) and Lily (Christel Khalil) will resort to childish behavior. They’ll lock Hilary (Mishael Morgan) in the office so she misses her rescheduled insemination appointment. Devon (Bryton James) will eventually arrive to free Hilary and scold the schemers.

In Hilary’s suite, Devon will console Hilary. She really wants a baby, but they’ll have to wait a month for another appointment. The Young and the Restless spoilers say Devon will offer an alternative solution. He’ll think they should just make a kid the old-fashioned way.

Hilary will get on board with the idea, so they’ll enjoy a steamy sex session. “Hevon” fans won’t want to miss it! We’ll give you updates as other details emerge. Stick with Y&R and don’t forget to check CDL often for the latest Young and the Restless spoilers, updates and news.