The Young and the Restless Spoilers: Friday, May 25 Update – Jack Quits, Kyle Sticks with Billy – Abby Invites Arturo to Miami

BY Heather Hughes on May 24, 2018 | Comments: one comment
Related : Soap Opera, Spoiler, Television, The Young and the Restless 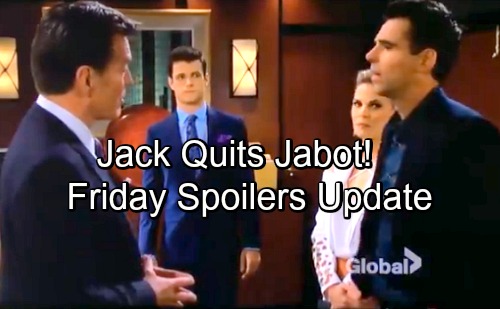 The Young and the Restless (Y&R) spoilers for Friday, May 25, tease that Billy (Jason Thompson) will want to ditch a Jabot classic. He’ll let a blindfolded Phyllis (Gina Tognoni) smell a scent that’s rather unpleasant. When Phyllis admits it’s not great, Billy will reveal that John (Jerry Douglas) developed it many years ago. He’ll think it’s time to bring Jabot into a new era with some modern updates.

When Jack hears the news, he’ll blow his top. However, Billy will call Jack’s attention to a memo from 2017. Jack also had the idea to ditch John’s scent, so this is really about Billy. Y&R fans know Jack’s just determined to shut down the new CEO’s suggestions.

Meanwhile, Phyllis will bicker with Kyle (Michael Mealor) before rejoining Billy. She’ll try to reassure her frustrated beau. Phyllis will insist that the Abbotts will get on board once profits go up. She’ll think this fresh start will work out well for everyone.

At the coffeehouse, Jack will talk to Kyle about all the Jabot drama. He’ll ultimately make a huge decision regarding his future. After returning to Billy’s office, Jack will announce that he’s quitting. He’ll urge Kyle to do the same, but his apologetic son will turn down the chance.

Other Young and the Restless spoilers say Abby (Melissa Ordway) will mull over an upcoming trip. She booked a getaway in Miami, but she won’t want to fly solo. Lily (Christel Khalil) will push Abby to take Arturo (Jason Canela), so she’ll gather up the courage to invite him. It’s a big step since they aren’t even an item yet, but Arturo will ultimately agree.

After Shauna and Charlie (Noah Alexander Gerry) leave for a night of fun, Hilary will reflect on a painful prom memory. Devon will think Hilary turned a negative situation into a positive one. She really came through for Shauna. Since Devon will catch Hilary trying on a dress, he’ll add a tiara and slow dance with her. They’ll hint that they’re each other’s prom king and queen.