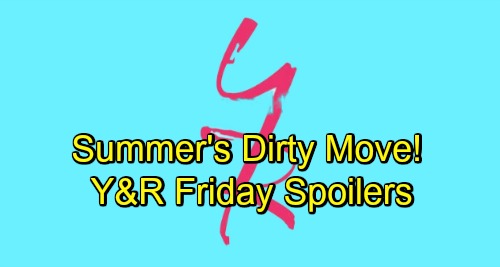 The Young and the Restless (Y&R) spoilers for Friday, November 16, tease that Nick (Joshua Morrow) will do something bold. Thursday’s episode brings plenty of jealousy over Sharon’s (Sharon Case) date with Billy (Jason Thompson). He isn’t too happy about Rey’s (Jordi Vilasuso) continued interest in Sharon either.

Perhaps Nick’s envy will drive him to make a vengeful splash on Friday. Before the party wraps up, Nick’s daring move could change the game. He might announce a more formal partnership between Dark Horse and Jabot or something along those lines. Regardless, Nick will make sure he’s the talk of the town – along with Phyllis (Gina Tognoni) of course.

Speaking of Phyllis, she’ll once again go to war with Billy (Jason Thompson). The Young and the Restless spoilers say Billy will get fed up with his ex’s spotlight hogging. He’ll decide to do something about it, which Phyllis won’t appreciate. They’ll battle to be the center of attention, but they may end up drawing the wrong kind of it! It’s easy to imagine their latest round of conflict causing chaos.

Other Y&R spoilers say Summer (Hunter King) will get sneaky. She’ll pull some sort of stunt in hopes of making progress with Kyle (Michael Mealor). Summer will also make herself perfectly clear in Friday’s new Y&R episode, November 16. She’ll let her feelings for Kyle be known, so Lola (Sasha Calle) may get an earful from the competition.

Naturally, Kyle will put up a fight. He’s fallen head over heels for Lola, so Summer’s mission is sure to be difficult. Kyle won’t want to ruin the good thing he’s got going, especially when Summer only plays games with his heart. The only reason she wants Kyle is because he doesn’t want her! Summer sees this is a challenge, not an epic love story.

Still, Summer can be awfully crafty and Lola’s not the type who’ll put up with much. Kyle will have to be careful if he wants to keep Lola in his life. One wrong move could mean the end of his new romance!