BY Heather Hughes on November 14, 2018 | Comments: one comment
Related : Soap Opera, Spoiler, Television, The Young and the Restless 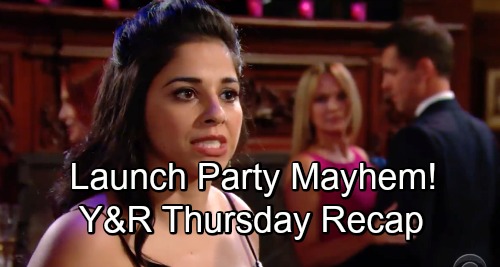 The Young and the Restless (Y&R) spoilers for Thursday, November 15, tease that Tessa (Cait Fairbanks) will have much more to spill. She’ll show Mariah (Camryn Grimes) a video of Nikki (Melody Thomas Scott), Victoria (Amelia Heinle), Sharon (Sharon Case) and Phyllis (Gina Tognoni) loading J.T.’s (Thad Luckinbill) body into the trunk. It’ll be from security footage she stumbled across.

Tessa will explain that she found some files while working at Dark Horse. J.T. was monitoring Victoria’s place through cameras, so one captured the cover-up crew in action. After Tessa found the video, she sent the core four their letters. Tessa decided $20,000 would be too suspicious, so she went for $250,000 instead. She’ll insist that her back was against the wall thanks to the smugglers.

Naturally, Mariah will lash out over the torture Sharon endured. She’ll insist there has to be another side to this story. Mariah will blast Tessa for hurting her mother, but Tessa will insist the whole thing’s been eating her up inside. It wasn’t easy, but she felt like she was doing what she had to do.

Tessa will add that she wishes she could be the person Mariah thought she fell in love with. She’ll assure Mariah that she wouldn’t have turned the ladies in, even if they hadn’t paid. That won’t be enough for Mariah. She’ll storm out in tears, so these two are really on an emotional roller coaster!

Meanwhile, Billy (Jason Thompson) will pick Sharon (Sharon Case) up for the Jaboutiques launch bash. They’ll certainly turn a few heads as they enter. Rey (Jordi Vilasuso) will be impressed with Sharon’s attire, but Mia (Noemi Gonzalez) will yank him away from the competition. Both Nick (Joshua Morrow) and Rey will seem envious of Sharon’s date.

Of course, Billy will hope to rub this in Phyllis’ (Gina Tognoni) face as well. Phyllis will end up shooting Sharon dirty looks, but Sharon will shoot them right back. However, The Young and the Restless spoilers say Phyllis will make time for the goal of the evening. She’ll announce the Jaboutiques launch with a little help from Lauren (Tracey E. Bregman) and Kerry (Alice Hunter).

Billy and Phyllis will end up arguing about who deserves the spotlight. Nick will also corner Sharon and grill her about the new men in her life. That’ll prompt Phyllis to drag Nick away and scold him. It’s not fitting for a power couple to behave this way – at least according to Phyllis.

Over with Jack (Peter Bergman), he’ll share a dance with Kerry before escorting her to her vehicle. Back with Rey, he’ll bicker with Mia until a shocker erupts. Abby will overhear Mia hold Rey responsible for her affair with Arturo (Jason Canela). It’s clear that even more Y&R drama’s ahead!