BY Sean O'Brien on November 14, 2018 | Comments: one comment
Related : Soap Opera, Spoiler, Television, The Young and the Restless 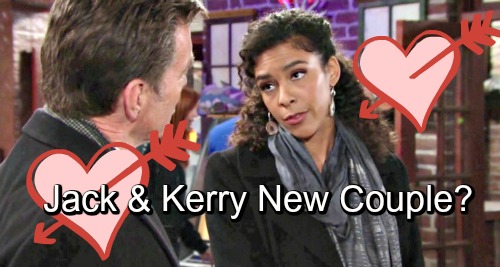 The Young and the Restless spoilers tease that Smilin’ Jack (Peter Bergman) may have a new muse. His initial and then revisited interactions with Kerry (Alice Hunter) potentially indicates a desire to create more than a business relationship. With Phyllis’ (Gina Tognoni) stunning reverting to Nick (Joshua Morrow), Jack is open to seeking another love and so Jerry, or Kack if one prefers, becomes possible.

Y&R’s newest character, among many in recent months, is both savvy and appealing. She was onto Kyle’s (Michael Mealor) attempt to use her to ferret information and stage a coup against Phyllis. That actual development influenced her reaction to Jack’s apparent friendly overtures.

Whether one of Genoa City’s most eligible bachelor’s is actually interested in Kerry isn’t fully known yet. Jack may simply be using his famous charm to keep tabs on someone who became Jabot’s new chemist based on Phyllis’ approval.

The idea that Phyllis had a contact who could fill the vacancy created by Ashley’s (Eileen Davidson) departure was believable. The fact that Miss Summers would be the person to hire Kerry after being elected as Jabot’s Chief Executive Officer is a soapy stretch, as Lauren (Tracey Bregman) was clearly capable of assuming a dual title and has actual corporate experience.

Davidson’s voluntary departure from the cast created an opportunity for Jabot to shift. Ashley’s exit story also saw John (Jerry Douglas) restored to his rightful place as Jack’s dad. With historical legacy in tact, Jack can now fully focus on both the business and personal sides of his life.

It seemed as though Y&R was telegraphing a Phack reunion earlier this summer. Phyllis was using Jack as her sounding board, reversing what was done when she left Jack and went to Billy (Jason Thompson). But Philly’s crash veered into a surprising Phick comeback, which allows Bergman’s character to be available.

Past overtures with Gloria (Judith Chapman) were never intended as anything more than a means to an end, though Chapman’s terrific alter ego had hoped for more as time passed. Sadly, Gloria is gone, with Chapman off to Days of our Lives. Ted (Sean Muramatsu) now handles Jabot’s administrative assistant duties.

Jack’s introduction of Nate (Brooks Darnell) to Kerry could easily lead to them pairing. Then, again Hunter’s character may want to stay single as she establishes herself in Genoa City.

Longtime Y&R viewers know to not rule Jack out as the suitor who Kerry could choose. Jack’s charm is legendary and the ability to get together with someone who has become a major player at Jabot makes Kerry all the more intriguing to John Abbott, Junior, as he eyes an eventual return to the helm.