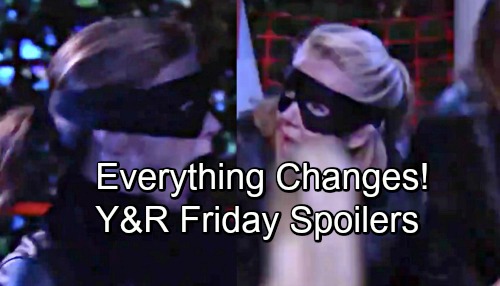 The Young and the Restless (Y&R) spoilers for Friday, November 2, tease that the digging mission will continue in Chancellor Park. On Thursday, Nikki (Melody Thomas Scott) is joined by Victoria (Amelia Heinle) and Phyllis (Gina Tognoni). They opt to get started shoveling since Sharon’s (Sharon Case) running late.

In Friday’s episode, Sharon will finally arrive for the unpleasant undertaking. She may spook the others in the dark, but they’ll refocus and try to get the job done. However, a shocker will derail the cover-up crew’s plans. The Young and the Restless spoilers say Victoria (Amelia Heinle) will make a stunning discovery and it just might change everything!

Will J.T.’s body still be there? It’d be a good twist if someone moved it before they had the chance. If that turns out to be the case, the girls’ night gang may fear that J.T.’s still alive. They might worry that the victim himself is the one blackmailing them.

Of course, there’s been no buzz about Thad Luckinbill reprising the role. It makes more sense for somebody to move the corpse instead. Victor (Eric Braeden) immediately comes to mind. Due to Braeden’s vacation, he hasn’t been spotted around Genoa City in a while. This could be a great storyline for Victor to come home to.

Victor has eyes and ears everywhere, so no one would be surprised if he was in the loop on this. Did he order the body moved to protect Nikki and Victoria? That’s certainly worth considering. Y&R fans will be anxious to see what happens next.

In the meantime, Lauren (Tracey E. Bregman) will get a blast from the past. Someone from her history will send an intriguing invitation, so this will kick off a new storyline. Michael (Christian LeBlanc) and Lauren had better be prepared for anything in the coming weeks!

Other Young and the Restless spoilers say Abby (Melissa Ordway) will offer some guidance. She’ll give it to Nick (Joshua Morrow), but it may not be what he wants to hear. Will Abby tell Nick to give his reunion goal a rest? She might think Nick should respect Sharon’s wishes and try to find a new path.

Sometimes there are mistakes you just can’t fix, so Nick needs to learn that. He’ll end up in a hot romance with Phyllis soon, so we’ll give you updates as other Y&R news comes in. Stay tuned to the CBS soap and don’t forget to check CDL often for the latest Young and the Restless spoilers, updates and news.