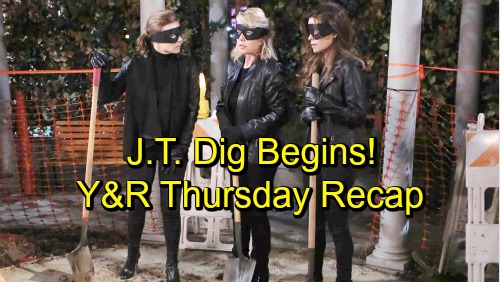 The Young and the Restless (Y&R) spoilers update and recap for Thursday, November 1, tease that Phyllis (Gina Tognoni) will achieve victory. She’ll be declared CEO of Jabot and head off to celebrate with Lauren (Tracey E. Bregman). At the athletic club, Billy (Jason Thompson) will corner them and start ranting about Phyllis’ power play. He won’t think she deserves the throne, but she’ll refuse to step down.

In Chancellor Park, Nikki (Melody Thomas Scott) will manage to get rid of Arturo (Jason Canela) and Jill (Jess Walton). The sculpture will be gone, so the corpse dig can begin soon enough. Jill will find Billy and Phyllis arguing at the club, so she’ll quickly join in. Once Billy drags Jill to the bar, she’ll express mixed feelings about his split. Jill will be glad Billy’s done with Phyllis, but his pain won’t please her.

Back with Phyllis, she’ll ask Jack (Peter Bergman) where he stands on the CEO issue. Jack will still believe he’s the right person for the job, but he’ll wish Phyllis luck anyway. As darkness falls on the park, Nikki will contact the other cover-up crew members. She’ll hope to assemble the gang ASAP and get this over with. The Young and the Restless fans will be anxious to see their mission kick off.

Nick (Joshua Morrow) will try to get Sharon (Sharon Case) in on his Peter Pan theme for Halloween. He’ll want to celebrate as a family, but she’ll ultimately reject the idea. Sharon will suggest that she can’t just pretend they’re moving forward. Nick will feel like Sharon has feelings for Rey (Jordi Vilasuso), but she’ll argue that this is about their relationship. She’ll remind Nick that it’s really over.

Victoria will finish trick-or-treating with the kids early and scold Billy for being late. He’ll want some Halloween family time, but she’ll shut down that plan. Victoria will insist on taking off, so it won’t be long until she’s at the burial site. Phyllis will join Victoria and Nikki as well, but Sharon will be running behind. Y&R spoilers say they’ll decide to start without her, so they’ll put their shovels to good use.

At Crimson Lights, Mariah (Camryn Grimes) and Tessa (Cait Fairbanks) will admire the matching tattoos they just got. They’ll don their Halloween costumes soon after, which will bring complaints from Mariah. She’ll be embarrassed by her Sonny getup since Tessa will look lovely as Cher.

Lola (Sasha Calle) will be a warrior princess, but Kyle (Michael Mealor) will show up costume-less. Fortunately, he’ll get some help from Lola, Tessa and Mariah. They’ll put together a primitive Superman outfit, but it’ll be good enough! While Kyle and Lola make out, Mariah will show Tessa an “I love you” pumpkin. They’ll talk about how far they’ve come since last Halloween and seal it with a kiss.