BY Heather Hughes on November 8, 2018 | Comments: one comment
Related : Soap Opera, Spoiler, Television, The Young and the Restless 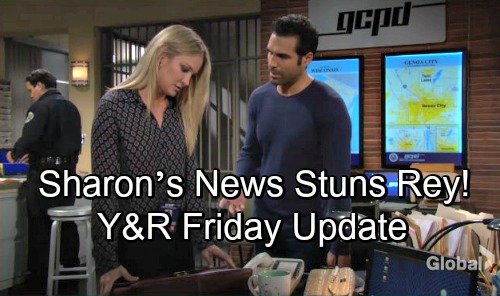 The Young and the Restless (Y&R) spoilers for Friday, November 9, tease that tension will erupt between Sharon (Sharon Case) and Nikki (Melody Thomas Scott). In light of Rey’s (Jordi Vilasuso) murder investigation, Nikki will think they need to stay in the loop. She’ll push Sharon to head back down to the police station and see what she can find out.

Sharon will contend that distance is best right now. She’ll feel like Rey’s getting better at reading her thoughts and feelings. However, Nikki will be adamant. She’ll shout at her to step up, so Sharon will reluctantly do what she’s told. Over with Phyllis (Gina Tognoni), she’ll get caught looking at the J.T. story. Kerry (Alice Jones) will notice Phyllis is quite interested, but the boss will quickly shift gears.

Y&R spoilers say Phyllis and Kerry will do some strategizing. They’ll have a few concerns about Jabot’s new lines, but Kerry will insist that she’s got it covered. At the athletic club, Nate (Brooks Darnell) will offer support to Victoria (Amelia Heinle). She’ll confess that she’s bracing for terrible J.T. updates.

After Victoria gets rid of Nate, he’ll turn his attention to Jack (Peter Bergman). The Young and the Restless spoilers say Jack will open up about his family issues and get a pep talk in return. Next, Victoria will end a call with Reed (Tristan Lake Leabu). She’ll fret to Nikki about Reed’s state of mind and worry that the truth will come out.

At the police station, Sharon will shock Rey by turning in her resignation. He’ll feel like it’s because of their near kiss, but he won’t want her to bail. Rey will eventually confess he has feelings for Sharon and she’ll hint about hers as well. However, Sharon will think it’s how they handle those feelings that matters. She’ll reiterate that she’s quitting, but Rey will ultimately talk her out of it.

At Crimson Lights, Mariah (Camryn Grimes) and Tessa (Cait Fairbanks) will revisit their living together discussion. Tessa will assure Mariah that she loves her and is all in on this. She’ll add that she won’t let Mariah pay for everything, so they’ll be splitting the rent.

Mariah will drop by the station to share her big news with Sharon. Her mom will wish her the best of luck, so Mariah will head home to pack. Soon after, Mariah will get a little choked up over leaving the cottage. It’s the first real home she ever had!

Nevertheless, Mariah will be ready to take the next step with Tessa. Once she gets to their studio, she’ll try to carve out some space in the closet. Tessa will be on edge over some bags, but she’ll manage to cover. When Mariah leaves the room, Tessa will peek inside one of the bags and reveal plenty of cash.

The Young and the Restless spoilers state that Mariah will return and embrace her girlfriend. The look on Tessa’s face will say it all. She’ll clearly be nervous about her money secret, which is set to blow up next week, November 12-16. We’ll keep you posted as other Y&R details emerge. Stick with the CBS soap and don’t forget to check CDL often for the latest Young and the Restless spoilers, updates and news.