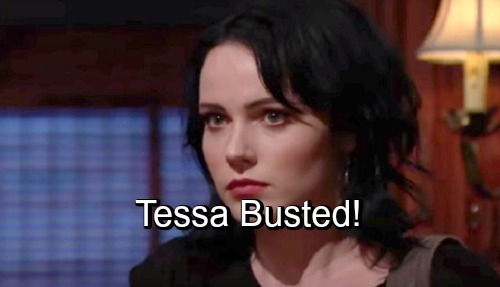 The Young and the Restless (Y&R) spoilers tease that Mariah’s (Camryn Grimes) bliss will suddenly turn into shock and suspicions. The trouble will start with an innocent gift. Now that Mariah’s moving in Tessa’s (Cait Fairbanks) place, she’ll decide they could use a new mattress. Perhaps Mariah will be inspired by the one Rey’s (Jordi Vilasuso) been raving about.

Unfortunately, Mariah’s kind gesture won’t go over well. The Young and the Restless spoilers say Tessa will hit the roof over this present. She’ll rip into Mariah for thinking she can just move in and start making decisions for both of them. Tessa’s rage-filled reaction will naturally catch Mariah off guard. Since Mariah’s new at this whole living together thing, she’ll fear she truly did cross a line.

However, there’ll clearly be more to the story. Tessa will quickly realize she screwed up in more ways than one. She certainly doesn’t want to hurt Mariah and she doesn’t want to draw attention to that mattress either. Tessa will try to undo the damage with an apology and a small gift of her own.

Next, Tessa will tackle a different problem. It turns out there’s a boatload of cash in that mattress, so she’ll step in the alley and retrieve it before it heads to the dump. When Mariah catches her, more conflict should erupt. This discovery will bring some obvious questions. Where did this money come from? Why is Tessa keeping it a secret from Mariah? Who else might be involved in this hot plot?

Let’s look at the facts. Tessa needs to pay off those smugglers and tends to make poor choices in desperate situations. There’s also an unidentified blackmailer, so Y&R may want us to believe it’s her. Nevertheless, it may not be quite that simple. Could Tessa actually be an accomplice – and perhaps one who’s not very informed?

Tessa was fretting about the threat to Mariah last week. She mentioned the guy who might’ve been following Mariah’s car and worried it was connected to the attack at the coffeehouse. If Tessa’s got all this money, why didn’t she just pay the smugglers off already? Perhaps that’s because it’s not her cash to shell out.

Tessa may have been given a cut, but she could be hiding the bulk of it for someone else. The Young and the Restless buzz suggests Tessa may not even know the money’s tied to the cover-up drama – if it even is at all.

People always want to talk about how shady Tessa is. That’s true, but she’s never acted with intentional malice. The girl’s not Ian Ward (Ray Wise)! We’re not dealing with a real villain here. Tessa will inevitably have decent reasons for stashing cash and keeping more secrets.

Of course, that doesn’t mean Mariah will move right past a huge incident like this. Trust issues will continue plague Mariah and Tessa, so they’ve got a lot to work through. We’ll give you updates as other Y&R news comes in. Stay tuned to the CBS soap and don’t forget to check CDL often for the latest Young and the Restless spoilers, updates and news.