The Young and the Restless Spoilers: Friday, October 19 – Dina Points Kyle to a Huge Secret – Nick and Rey Battle

BY Heather Hughes on October 17, 2018 | Comments: one comment
Related : Soap Opera, Spoiler, Television, The Young and the Restless 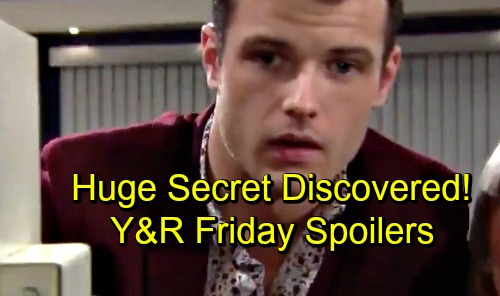 The Young and the Restless (Y&R) spoilers for Friday, October 19, tease that Nick (Joshua Morrow) will be relentless in his pursuit of Sharon (Sharon Case). He’s just not convinced that their love story is truly over. Nick will make another attempt to get their romance back on track, but he’ll once again be denied.

Sharon won’t know how many times she has to repeat this. She’ll want Nick to accept that they’ve split and move on with his life. That’s certainly what Sharon’s doing. She’s choosing not to wallow in what might’ve been. The latest round of “Shick” was doomed from the start, so Sharon’s heading down a different path. Out with the old and in with the new!

Of course, Rey’s (Jordi Vilasuso) a fresh love interest in town. Sharon and Rey have agreed that they’re just friends, but Nick will suspect they’re inching toward more. After Sharon shuts Nick down, he’ll turn his attention to the competition.

Nick will tell Rey that he understands the game he’s playing. He’ll suggest that Sharon may be duped by the nice guy act, but he isn’t. Rey might argue that Nick’s the one who isn’t a nice guy! Nick betrayed Sharon with Phyllis (Gina Tognoni) and lied about it, so it’s no wonder Rey’s appealing right now. Sharon’s eager to have a clean slate and Rey could be part of that eventually.

Rey’s J.T. (Thad Luckinbill) investigation will inevitably complicate things, but love can overcome plenty of obstacles. In the meantime, Dina (Marla Adams) will need a favor from Kyle (Michael Mealor. She’ll start ranting about John’s (Jerry Douglas) safe and contend that she needs to open it immediately.

Kyle may not be sure this safe even exists, but Dina will maintain that it does. She’ll point Kyle in the direction of Jabot, so he’ll cave in and let his grandmother take a little field trip. Y&R fans can expect a huge secret to be buried in this safe. The Young and the Restless spoilers say Kyle will get his hands on it soon, so he’ll have to decide what to do.

Kyle will have the power to blow the Abbott family up all over again. It looks like Ashley (Eileen Davidson) will be particularly affected by this big news, so stay tuned for all the Young and the Restless drama. We’ll give you updates as other Y&R details emerge. Stick with the CBS soap and don’t forget to check CDL often for the latest Young and the Restless spoilers, updates, and news.