BY Marcy Cohen on September 13, 2018 | Comments: one comment
Related : Soap Opera, Spoiler, Television, The Young and the Restless 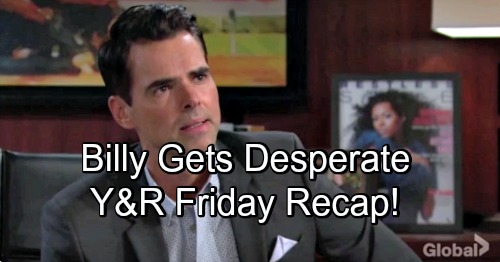 The Young and the Restless (Y&R) spoilers update and recap for Friday, September 14, tease that Kyle (Michael Mealor) will decide to grab some Cuban food. He’ll check out a new truck by Jabot, which will be run by Lola (Sasha Calle). Y&R fans have heard that name by now. She’s Rey (Jordi Vilasuso) and Arturo’s (Jason Canela) sister, so expect her to get caught in some family drama eventually.

For the time being, Lola will get a bit irritated with Kyle. He’ll change his order and ruffle a few feathers, but there’ll definitely be a spark. Kyle will have to admit that the food’s great. Meanwhile, Gloria (Judith Chapman) will overhear part of Billy’s (Jason Thompson) phone conversation. She’ll determined that he’s gambling again, so she’ll advise him to be careful around Kyle.

Later, Kyle will rummage through Billy’s trash can and make a discovery. He’ll fib to Gloria about finding the paper in the elevator. Kyle will point out that it’s got some wagers on it. He’ll suggest that there’s some gambling going on, but Gloria will pretend she’s out of the loop.

Over with Abby (Melissa Ordway), she’ll have big news for her mom. The Young and the Restless spoilers say Ashley (Eileen Davidson) will hear about a paternity development. A GC Buzz viewer reached out with startling info. Ashley will be stunned to hear Matt Miller (Richard Gleason), Victor’s (Eric Braeden) brother, is the one who got in touch.

Abby will explain that Jack (Peter Bergman) and Victor could have the same father. After Ashley asks Abby to keep this a secret, she’ll vow get to the bottom of it herself. Ashley will suggest that she believes Matt’s claims, but wants to learn more before they blab to Jack.

Afterward, Abby will make her way over to The Dive Bar. She’ll lock lips with Arturo (Jason Canela), but she won’t be pleased that he kept Rey’s job a secret. Nearby, Billy and Jack will clash a bit before Abby walks over. She’ll fib that there were no responses to the photo on GC Buzz.

However, the guilt will ultimately be too much for Abby. She’ll reconvene with Jack and reveal that Matt Miller reached out. Jack will be shaken at the thought of Albert Miller (George Kennedy) being his father. He won’t want to hear any more details from Abby.

Back with Arturo, he’ll take a moment to catch up with Lola. Arturo will note that Rey’s been asking about her and wants to meet up soon. Elsewhere, Billy will find Ashley to ask about some repeat payments to Type A Consulting. She’ll make up a story and call someone once Billy’s gone. After Ashley insists that they have to be more careful, she’ll pass along what she shared to keep the story straight.

When Billy returns to his office, he’ll learn that he lost another bet. Y&R spoilers say Billy will plan on cashing in some stocks to get ahead again. At Crimson Lights, Sharon (Sharon Case) will rush in and find out that Tessa (Cait Fairbanks) was attacked. A heavily bruised Tessa will refuse to go to the cops or the hospital.

Thankfully, Nate (Brooks Darnell) will walk in and agree to check Tessa out. He’ll suggest that she seems OK other than the bruises. Once they’re alone, Tessa will push Sharon to keep Mariah (Camryn Grimes) and Nick (Joshua Morrow) in the dark. She’ll think it’s for their safety. Sharon will just feel guilty that she doubted the danger Tessa was in.

Sharon will decide to take a look at the security tapes, but Tessa will blurt out that she erased them already. The revelation will annoy Sharon, but Tessa will contend that she can’t put Crystal (Morgan Obenreder) in harm’s way. It sounds like Tessa could be in far worse peril than anyone thought.