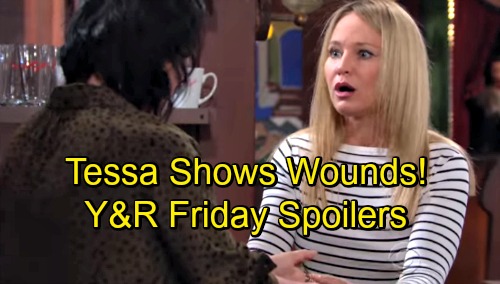 The Young and the Restless (Y&R) spoilers for Friday, September 14, tease that Kyle (Michael Mealor) will be feeling a little down in the dumps. He’ll need a good meal as a pick-me-up, but he’ll find some good company as well. Kyle will stumble across a new food truck in town. He’ll soon be rather enchanted by the lovely girl who runs it.

Once Kyle introduces himself, this girl will do the same. It turns out it’ll be Lola (Sasha Calle), Rey (Jordi Vilasuso) and Arturo’s (Jason Canela) sister. Kyle’s dealing with a broken heart thanks to Summer (Hunter King), who’s clearly fighting her attraction to him. Maybe Summer’s just afraid to love, but she might have to learn a hard lesson here. You snooze, you lose in Genoa City!

The Young and the Restless spoilers hint that Kyle and Lola will hit it off. You can bet he’ll be drawn to her in the coming weeks. Will Summer find herself battling jealousy? Could she resort to sabotage and try to drive Lola out of the picture? Time will tell, but for now this will be the beginning of a beautiful friendship. Kyle and Lola can kick things up a notch down the road.

Meanwhile, Sharon (Sharon Case) will rush over to Crimson Lights. After overhearing a scuffle during Thursday’s phone call, Sharon will want to check on Tessa (Cait Fairbanks). She’ll fear that Mariah’s (Camryn Grimes) girlfriend could be injured or missing after all that commotion.

Once Sharon shows up, Tessa will still be around. However, she’ll have some nasty bruises on her arm and quite a story to tell. Tessa will be visibly rattled as she explains what happened. She’ll admit that the baddies came after her and insisted on getting their money now.

As Sharon and Tessa mull over what to do, Ashley (Eileen Davidson) and Billy (Jason Thompson) will clash. Since Billy’s back to gambling, Ash may get updates and scold him. This is a dangerous path for an addict, particularly one who’s serving as CEO of a major company. Ashley may grow increasingly concerned about both her brother and Jabot.

Over with Abby (Melissa Ordway), she’ll come clean about something. Abby might have some Rey-related confession to pass along. Y&R spoilers say Rey will manage to come between Abby and Arturo this fall, so now’s the perfect opportunity to get that started. The harder Abby pushes for info on their past, the more Arturo may push her away.