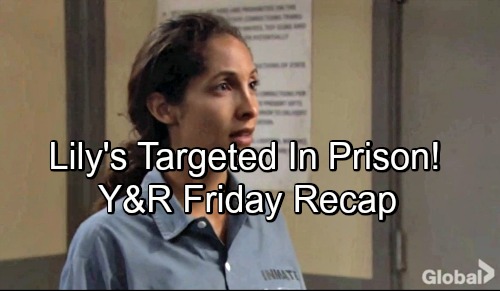 The Young and the Restless (Y&R) spoilers for Friday, September 7, tease that Abby (Melissa Ordway) will be glad to have Jack (Peter Bergman) home. He’ll acknowledge that things could be tricky now that he’s living at the Abbott mansion again. Phyllis (Gina Tognoni) and Billy (Jason Thompson) are also living there, so they’ll just have to get used to the awkwardness.

Talk will turn to Abby’s beau woes. She’ll admit that Arturo’s (Jason Canela) avoiding Genoa City at the moment. Abby will suggest that it’s because of his war with his brother, Rey (Jordi Vilasuso). Jack and Abby will also talk about Dina (Marla Adams). Her declining condition has left Jack distraught. He’ll indicate that he still wants to know who his real father is.

Later, Ashley (Eileen Davidson) will appear and touch on her romance with Neil (Kristoff St. John). Her brother will hope things work out for them. Jack will also wonder if Neil might do him a favor. He’ll point out that the server company might’ve stumbled across some Dina-related discoveries.

Abby will gaze at the old photo Jack found, which led to his failed mission to prove Phillip Chancellor (Donnelly Rhodes) was his dad. She’ll be perplexed since Dina didn’t actually have an affair with Phillip. Jack will suddenly realize that other men are gazing longingly at Dina in the pic. He’ll suspect that Dina turned to one of them after Phillip’s rejection. Now Jack just has to find out which one!

Meanwhile, Phyllis (Gina Tognoni) and Billy (Jason Thompson) will show up Las Vegas. They’ll park it in their hotel room and discuss the upcoming poker tournament. Billy will be brimming with confidence, but Phyllis will try to dial it down. She’ll even hint that maybe Billy should drop out, but she’ll also reiterate her support. Billy will believe he’s going to score plenty of cash thanks to this game.

Later, Sinead (Lira Kellerman) will knock on the door. After Billy answers and introduces her to his girlfriend, Sinead will mention that she scored Billy’s tournament spot. Red flags will immediately be raised for Phyllis. She’ll be curious what Sinead stands to gain.

The Young and the Restless spoilers say Sinead will make up an excuse, but Phyllis will remain uneasy. Once Sinead’s gone, Phyllis will reveal her lack of trust to Billy. The tournament will eventually kick off, so Y&R fans can expect a big victory for Billy. He’ll celebrate by making love to Phyllis, but Sinead will interrupt again afterward. She’ll mention that in the next round, the stakes are doubled.

Back in Genoa City, Cane (Daniel Goddard) and the twins will prep for their prison visit with Lily (Christel Khalil). Charlie (Noah Alexander Gerry) will fear that he’s going to say something wrong, but Cane will offer reassurance. However, he’ll seem anxious when Charlie looks away.

In Walworth’s visiting area, Lily will try to make normal conversation with her family. She’ll want the details on the twins’ first day of school. Mattie (Lexie Stevenson) will make an effort to share, but Charlie will be miffed. He won’t like Lily pretending that this is a spa or something.

Lily will promise that she’s all right, but she’ll confess her true feelings once she’s alone with Cane. Y&R spoilers reveal that Lily’s viewed as a spoiled rich girl behind bars. She’s got a target on her back, so she’ll worry about how she’s going to endure a year of this. Cane will vow to turn his lights off at 10:00 p.m. along with her. He’ll be waiting when she’s free and can return home to him.

Charlie will spot Lily’s tears as he peeks in on their chat. This is taking a toll on all the Ashbys, but they’ll just have to carry on. We’ll give you updates as other Young and the Restless news comes in. Stay tuned to the CBS soap and don’t forget to check CDL often for the latest Young and the Restless spoilers, updates and news.