The Young and the Restless Spoilers: Guilt Consumes Lily, Charlie, and Shauna After Hilary’s Death

BY hellodrdavis on July 23, 2018 | Comments: one comment
Related : Soap Opera, Spoiler, Television, The Young and the Restless 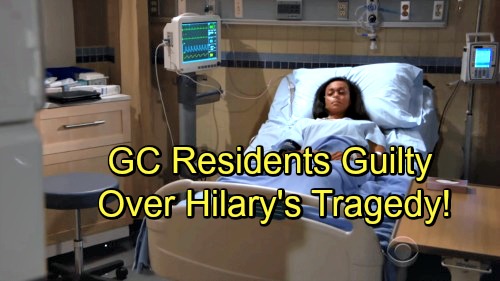 The Young and the Restless spoilers tease that some Genoa City residents are going to battle intense guilt as a result of the accident that will ultimately take Hilary’s (Mishael Morgan) life. The horrible car accident occurred as Lily (Christel Khalil), Hilary, and Charlie (Noah Alexander Gerry) were searching for Shauna (Camryn Hamm). Lily, who was arguing fiercely with Hilary, ran a red light and Hilary bore the brunt of the impact.

Lily, Charlie, and Shauna were in complete shock after the accident, but as a little time passes, some serious guilt is bound to set in. Lily said some terrible things to Hilary in the moments leading up to the accident, including telling Hilary that she has no business being a mother. Since Hilary lost the baby in the accident, Lily will naturally feel awful about her words.

Lily will have more to deal with as details about the accident become known. Lily doesn’t realize that she ran a red light. After all, she and Hilary were in the middle of an argument at the time, and Lily wasn’t really paying attention to the road.

Once Lily learns what caused the accident, she will have to deal with the fact that she’s responsible. This will be a heavy burden for her to bear. Fortunately for Lily, it seems that Hilary won’t blame her for what’s happened. Still, Lily will have to battle her own conscience and the guilt will surely eat at her.

Charlie and Shauna will have a lot to deal with too, in the aftermath of this tragedy. They will probably feel guilty for their secret hookup at Devon (Bryton James) and Hilary’s place, which set the events in motion that led to the accident. And Shauna may feel that if she just hadn’t run off, the accident wouldn’t have happened. It will be a lot for these young kids to shoulder.

Of course, no one wanted this accident to occur; it was just an unfortunate event. But that won’t be immediately comforting for Lily, Charlie, and Shauna. It will take some time and a lot of help for them to come to terms with what’s happened. They’ll all have a lot to work through.

Will Lily, Charlie, and Shauna be able to cope with Hilary’s death and work through their feelings? Stick with the CBS soap and don’t forget to check CDL often for the latest Young and the Restless spoilers, updates, and news