BY Kinsley Goldman on October 10, 2018 | Comments: one comment
Related : Soap Opera, Spoiler, Television, The Young and the Restless 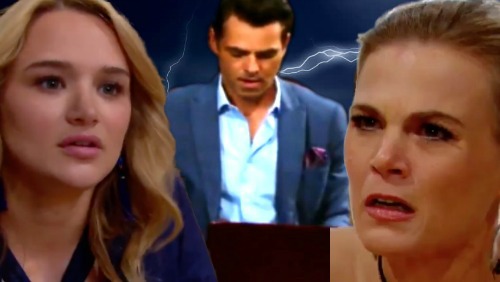 The Young and the Restless (Y&R) spoilers tease that Phyllis (Gina Tognoni) has more heartache ahead of her. Her engagement to Billy (Jason Thompson) was certainly short-lived! Phyllis only got a few minutes of being a blissful fiancée before everything went down in flames. Now Phyllis is left wondering where to go from here.

Billy (Jason Thompson) left for rehab soon after their blowup, which may or may not be beneficial. It’s possible the time away will help Billy cool off and find forgiveness in his heart. After all, Billy and Phyllis weren’t actually an item when this “betrayal” happened. They were only apart for a couple nights, but Phyllis was technically entitled to do whatever she wanted.

It’s also possible Billy will stew and get even angrier, but that doesn’t seem too likely. Perhaps Billy’s hookup with Summer (Hunter King) will weigh on him. After Billy dumped Phyllis and kicked her out, he immediately hopped in bed with her daughter. Once Billy mulls it over, he may realize how easy it is to make hurtful, impulsive decisions when you’re vulnerable.

In other words, sex with Summer could help Billy grasp Phyllis’ perspective. Too bad that’s the way he had to understand! Of course, Phyllis isn’t in the loop on that Young and the Restless shocker just yet. She’s be beside herself if she knew, but it’s probably best if she doesn’t right now. Phyllis has enough on her plate as it is.

Between the breakup and the cover-up crew drama, Phyllis will remain stuck in some messy situations. She’ll battle sorrow as she waits on Billy to complete rehab and return to Genoa City. Despite how they left things, Phyllis will hold out hope for a “Philly” reunion. If all goes well, she just might get one.

By the time Billy comes home, he may be ready to talk. Since Billy will have an opportunity to reflect on Phyllis’ mistake and his own, he might be willing to let the past go. However, Billy may not learn a lesson regarding secrets. He could easily try to sweep his momentary lapse in judgment under the rug. Billy might push Summer to keep her mouth shut about their one-night stand.

Good luck with that, Billy! The brat’s loose lips definitely won’t stay closed for long. Summer might even end up pregnant with Billy’s baby. You just never know on Y&R! The Young and the Restless spoilers say Billy and Phyllis have more conflict in their future, so don’t miss the chaos that’s in store.

Can “Philly” overcome their next hurdle? Are Billy and Phyllis destined to be together or will they ultimately head down different paths? We’ll give you updates as other Y&R news comes in. Stick with the CBS soap and don’t forget to check CDL often for the latest Young and the Restless spoilers, updates and news.