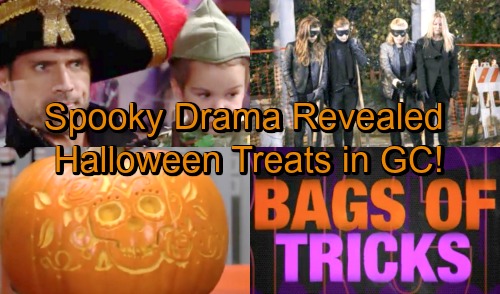 The Young and the Restless spoilers tease that Halloween week will offer fans a number of treats. The best pieces of plot candy involve the end of one arc, the potential major breakthrough in another, and plenty of interpersonal drama.

The apparent end of Eileen Davidson’s (Ashley Abbott) run with Y&R doesn’t necessarily mean that her alter ego will never be seen again in Genoa City. This character could be recast, but that doesn’t seem likely in the near-term future.

Davidson’s decision to leave a role she first played in 1984 means that the Abbott family dynamic will shift from an Ashley verses Jack (Peter Bergman) battle. The Emmy-winning actresses departure leaves a whole in the cast and may also serve to shift the focus of the legacy family to Kyle (Michael Mealor) and Billy (Jason Thompson). Their rivalry could easily supplant Jack’s revealed insecurities where John’s (Jerry Douglas) legacy was concerned.

Meanwhile, over at Chancellor Park, J.T.’s (Thad Luckinbill) unjust burial crew attempts to dig toward his decayed body. Yes, this gory Halloween story is being shown when all saints and all souls are honored this week in GC.

An unexpected visitor scares the heck out of the seasonally dressed coverup crew. That person’s arrival, while unexpected, plays into the near-term end of this storyline that first began in spring.

Vickie (Amelia Heinle) was J.T.’s victim and deserves to just punishment. Sharon (Sharon Case) has been the main voice of reason from the beginning and hopefully won’t be put in jail after having been emotionally blackmailed into keeping quiet about this entire matter.

Speaking of Sharon, Nick (Joshua Morrow) will again be with his true love. Shick, though not the remarried version as hoped, will be taking the kids trick-or-treating this week. Y&R’s purposely screen pairings of these characters keeps hope for their reunion alive, despite Sharon’s current feelings.

While Nick wants to be with Sharon, he also remains close to Phyllis. Now that Billy has evicted her from his heart, there’s real reason to believe that Phick, not Shick would revive, alternatively.

With her mother having flown to Paris, Abby (Melissa Ordway) will continue to concentrate on developing a relationship with Arturo (Jason Canela). His sister, Lola (Sasha Calle), has temporarily opted to flick Kyle away. Ah, that’s a momentary matter, as Kola is destined to reignite before Thanksgiving.

Of course, there are many other dramas that could be mentioned. Daytime fans know that while those Midwestern fall temperatures chill the air in this fictional city, the action will be hot as Halloween week leads to the start of November.