The Young and the Restless Spoilers: Wednesday, October 31 – Rey’s Fierce Warning – Jill and Nikki Face Off – Billy and Phyllis Battle

BY Heather Hughes on October 29, 2018 | Comments: one comment
Related : Soap Opera, Spoiler, Television, The Young and the Restless 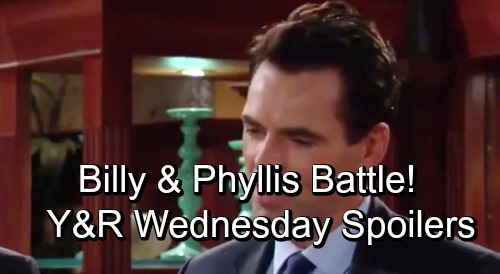 The Young and the Restless (Y&R) spoilers for Wednesday, October 31, tease that Halloween will bring some shockers. First, Nikki (Melody Thomas Scott) is in for an unpleasant surprise. Jill (Jess Walton) will make her way back to Genoa City and immediately stir up some trouble. She’ll get on Nikki’s bad side, so Y&R fans can expect a heated confrontation.

Jill might rant about the water leak in Chancellor Park. She could complain about her precious sculpture having to be removed, but Nikki won’t care about that. Obviously, the cover-up crew has much bigger problems at the moment – like the body underneath the sculpture. Unless some Young and the Restless trickery is in play, J.T.’s (Thad Luckinbill) corpse is still rotting away down there.

Nikki will try to keep a lid on the secret and handle Jill’s drama. If she’s not careful, she could raise some suspicions. Sharon (Sharon Case), Victoria (Amelia Heinle), Nikki and Phyllis (Gina Tognoni) could all use a lesson in being discreet. They’re having dozens of “charity project” meetings with people they don’t normally get along with or in some cases, loathe. It’s no wonder Rey’s (Jordi Vilasuso) hot on their trail!

Speaking of Rey, he’ll have a warning for Lola (Sasha Calle) on Wednesday’s new Y&R episode, October 31. The Young and the Restless spoilers say Rey will once again overstep as a protective big bro. When he senses that Lola and Kyle (Michael Mealor) could still be a thing, there’ll be a lot to discuss.

Rey doesn’t trust Kyle, so he won’t think Lola should either. For the record, she doesn’t after that game night fiasco. Kyle bailed on Lola for Summer’s (Hunter King) sake, so he’s got some work to do if he wants to earn those trust points back. However, Rey’s warning will probably make Lola determined to rebel. She may be more inclined to give Kyle another chance – just to prove she can.

Other Young and the Restless spoilers say a fierce war will take place at Jabot. Phyllis, Billy (Jason Thompson) and Jack (Peter Bergman) will all be power players, but the real battle will emerge between Billy and Phyllis. Their personal conflict will no doubt be driving their fight for CEO seat.

Word has it Phyllis may come out on top later this week, so stay tuned for the chaos that brings. We’ll give you updates as other Y&R news comes in. Stick with the CBS soap and don’t forget to check CDL often for the latest Young and the Restless spoilers, updates and news.