The Young and the Restless Spoilers: Hilary Faints After Wrecking Devon’s Date – Pregnant With Hevon Baby 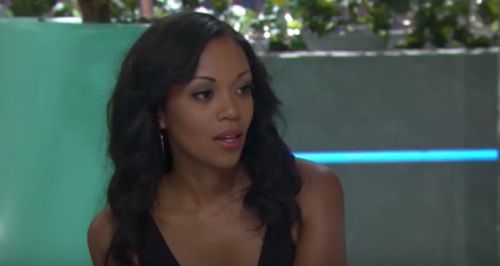 The Young and the Restless (Y&R) spoilers tease that Hilary (Mishael Morgan) will make another play for Devon’s (Bryton James) heart. Unfortunately, he’ll shut her right down! Devon will refuse to meet up with Hilary for a chat and she won’t be happy about the reason why. He’ll point out that he’s already got a date for drinks with Simone (Shanica Knowles).

In the midst of Hilary’s fuming, she’ll find herself feeling a bit lightheaded. Devon hasn’t been too pleased with Hilary lately, but he still cares about her. He won’t want to handle the matter himself, but he’ll at least get Tessa (Cait Fairbanks) to help out. The Young and the Restless spoilers say Tessa will follow Devon’s orders and take Hilary to get a meal. Devon will hope that’ll solve her woozy problem.

Of course, there aren’t very many places to eat on Y&R. There aren’t many places to get drinks either! Naturally, the whole gang will end up at the athletic club. Hilary will be munching and minding her own business when Devon comes in with Simone. She’ll fume as Tessa urges her to chill out and eat her food. Confrontations never work out well for Hilary, so Tessa will think it’s best to avoid this one. 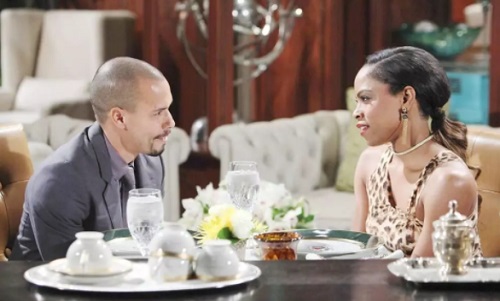 Nevertheless, we all know how hard it is for Hilary to sit down and shut up. He’s downright impossible! The Young and the Restless spoilers state that Hilary will hear her name during Devon and Simone’s discussion. That’ll really set her off, so she’ll decide to march over and give them both a piece of her mind.

Hilary will argue that if they’ve got something to say, they should say it to her face. She won’t stand for them badmouthing her behind her back. Before Devon can weigh in, a shocker will strike. The Young and the Restless spoilers reveal that Hilary will faint in the middle of her outburst.

Devon may wonder if this means Hilary’s pregnant and there’s a good chance that’s true. However, Devon also knows Hilary’s track record. Honesty isn’t one of her strong suits, so he may worry that this is all a big scam.

Lots of love to go around but especially to all of YOU!!! #Hevon #YR @YandR_CBS @CBSDaytime pic.twitter.com/LHEJzsHdId