The Young and the Restless Spoilers: Hilary Leans on Nate After Miscarriage – Devon’s Meltdown Drives Grieving Mom Out of GC

BY Kinsley Goldman on July 11, 2018 | Comments: one comment
Related : Soap Opera, Spoiler, Television, The Young and the Restless 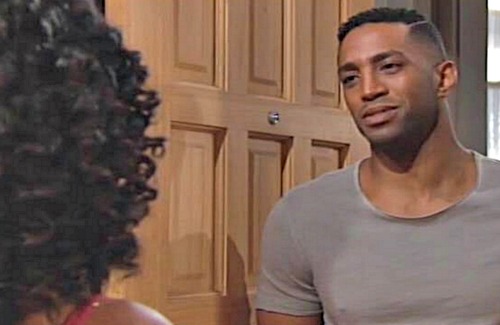 The Young and the Restless (Y&R) spoilers tease that some serious drama’s in Hilary’s (Mishael Morgan) future. Y&R fans know Mishael Morgan decided to leave the CBS soap, so Hilary has been written out. Since her exit will be here soon enough, we should start thinking about how Hilary’s time in Genoa City will conclude.

It’s obvious The Young and the Restless originally had a different plan in mind. The reintroduction of Nate (Brooks Darnell) makes it seem like they were gearing up for a love triangle. “Hevon” never gets happiness for long, so that was probably set to be their next obstacle.

Of course, Morgan’s departure must’ve blown that idea and forced the show to make some adjustments. Soaps just have to work around casting changes and press on. Hilary probably won’t be around to pursue a full-blown romance with Nate, but perhaps Y&R could still do a spin on this story.

Hilary’s currently pregnant with Devon’s (Bryton James) baby, so that’s an important piece of the puzzle. Although Hilary tends to be brash and manipulative, it’s tough to believe she’d deny Devon the right to parent his child. They’re both over the moon about this impending bundle of joy.

Hilary searched high and low for a father candidate as good as Devon, but she never found him. Even if things go south between them, it wouldn’t make sense for her to take off while pregnant. Devon would be a dependable, caring and extremely wealthy dad to this kid. Hilary knows that, so a miscarriage seems more likely at this point.

There have already been some hints about looming doom. For example, the baby’s heartbeat was missing briefly during Hilary’s last ultrasound. The panic Devon and Hilary felt should be repeated. Unfortunately, despair will probably follow it.

What will Hilary do after tragedy strikes? Maybe she’ll use Nate as a shoulder to cry on. Hilary and Nate hate each other right now, but that could be due to some attraction under the surface. Nate could easily play a role in Hilary’s exit. Let’s say he’s there for Hilary after she loses her baby. Nate lost the love of his life, so he understands grief.

If Devon spots them in a kiss or some other close moment, it could bring a disastrous end to “Hevon.” Their relationship may be hanging by a thread anyway thanks to the miscarriage. It’s easy to imagine Hilary leaving town after Devon’s meltdown. She might take an enticing job offer and seek a fresh start somewhere else.