The Young and the Restless Spoilers: Newman Security Staff Hopeless – Is J.T. or His Twin Coming For Revenge?

BY Sean O'Brien on July 11, 2018 | Comments: one comment
Related : Soap Opera, Spoiler, Television, The Young and the Restless 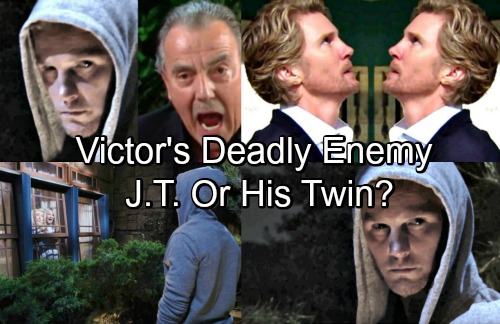 The Young and the Restless spoilers tease that the infamous Newman Ranch security staff must be headed by Barney Fife (played by the late, great Don Knotts), or one of his descendants. Yet another deranged lunatic broke through Victor’s (Eric Braeden) well-paid home security shield and scared the stuffing out of Nikki (Melody Thomas Scott) and Sharon (Sharon Case).

Seasoned entertainment fans, along with viewers of any age who are familiar with The Andy Griffith Show know that one of, if not the greatest sidekick characters of all-time was played by Knotts. His character, the ever-bumbling, but kind-hearted Barney Fife defined ineptitude decades ago on that classic black and white sitcom.

Using the above paragraph as a primer, Victor’s so-called security staff allowed J.T. (Thad Luckinbill), a new character Luckinbill is portraying, an actor who resembles Luckinbill, or possibly, Trent Luckinbill, Thad’s real life twin brother, in what would be his second Y&R appearance, to get by them and make his way to the cottage. Then, the security staff apparently was aware of nothing being wrong until Nick (Joshua Morrow) went to the main house and posted a person at each doorway.

Fife often said that trouble needed to be stopped before it started. “Nip it in the bud!”, was his trademark quote.

As opposed to Barney’s good intentions, Victor’s security staff has allowed any number of depraved characters, some of whom were returning for revenge, to go after many Newman family members. As Y&R fans recall, J.T. made his way onto the Ranch and into the main house the night he and Victor fought. That event included Braeden’s masterfully shot backwards fall down the stairs, which caused Victor’s coma and mini-stroke.

It’s natural to believe that J.T. would still be trying to finish off The Moustache. But there’s one soapy problem with that line of thought, J.T. has to be dead. Not might be, could possible be, may be, no Thad Luckinbill’s character is, without question, dead. If he’s not, then maybe Thad wasn’t playing J.T. when he returned to Y&R’s cast last fall.

Upon second glance, it does look like Thad in the turnaround shot that ended a recent episode. Though, as noted, it could also be his real life twin, Trent. In either case, a Luckinbill is portraying someone who looks like J.T., J.T.’s previously unknown twin, or J.T. himself, assuming an imposter was embodying that persona from December through spring.