BY Heather Hughes on July 10, 2018 | Comments: one comment
Related : Soap Opera, Spoiler, Television, The Young and the Restless 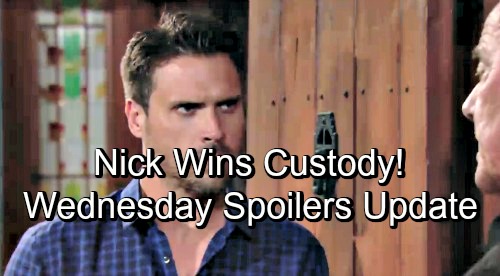 The Young and the Restless (Y&R) spoilers for Wednesday, July 11, tease that Summer (Hunter King) will have a rough night. She’ll spend the entire evening trying to keep Phyllis (Gina Tognoni) away from Billy (Jason Thompson). He’s got a poker game to win, so he doesn’t need Phyllis showing up and making trouble.

Phyllis will believe Billy’s working late, so she’ll consider taking dinner to him. Fortunately, Summer will talk her out of it and avert the first crisis. She’ll suggest they should dine together at Top of the Tower, but Phyllis will have her heart set on the athletic club. That’ll be inconvenient for secretive Summer. Billy will be in a suite upstairs, so Summer will have to keep Phyllis occupied.

After dodging a couple more disasters, Summer and Phyllis will return home. The Young and the Restless spoilers say Summer will breathe a sigh of relief and shoot Billy a text. She’ll let him know everything turned out OK.

However, Summer won’t realize that Phyllis slipped out to see Billy at work. Once Phyllis finds the dark building, she’ll get a text from Billy. He’ll claim he’s stuck at the office, so Phyllis will catch him in a lie. Afterward, Phyllis will share her troubles with Hilary (Mishael Morgan). She’ll feel like Billy might be cheating, so Hilary will think she should hire a private investigator.

Meanwhile, Sharon (Sharon Case) will tell a few fibs of her own. Mariah (Camryn Grimes) will rev up the pressure regarding the night J.T. (Thad Luckinbill) vanished. She’ll get Sharon to admit J.T. was indeed upstairs, but that’s where the truth will end. Sharon will suggest that Victoria helped J.T. get away and they all had her back. She’ll contend that they just wanted rid of him.

Sharon will swear Mariah to secrecy and await word on the custody battle. A final ruling’s on the way, so Sharon will definitely be on edge. Over with Victor (Eric Braeden), he’ll meet with Nate (Brooks Darnell) for a rescheduled appointment. Nate will lecture Victor for missing the other one and insist that his recovery took a step back. He’ll want Victor to really focus on getting better.

Nate will also spar with Hilary in Wednesday’s Y&R episode. He’ll push her buttons at The Dive Bar, but she’ll get the last laugh in the hallway of their building. Nate will get locked out of Neil’s (Kristoff St. John) penthouse, so Hilary will thoroughly enjoy his blunder.

Back with Nick and Victor, they’ll both be confident about securing custody of Christian (Jude and Ozzy McGuigen). Once the decision is emailed to them, they’ll give each other a glare. Nick will return home to a worried Sharon. She’ll fear that he lost, but he’ll surprise her by bringing Christian in.