The Young and the Restless Spoilers: Hot Blind Item Points to Major Return – Michael Muhney Finally Back as Adam Newman? 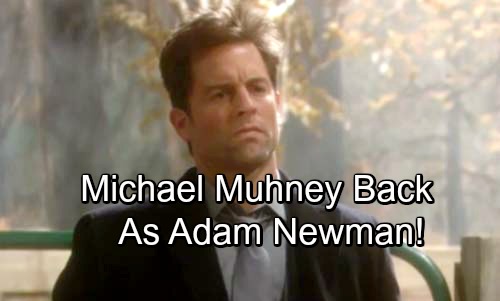 The Young and the Restless (Y&R) spoilers tease that a big comeback could be in the works. A new blind item out points to a major return, so that creates some interesting possibilities. According to Soap Opera Digest, one of the four daytime dramas is reaching out to a former hunk. They’ve got plans to put a hot male star back in the mix, which might be a good idea for Y&R.

There’s no guarantee The Young and the Restless is the soap behind this return, but it’s definitely worth considering. After all, the show’s faced some tough losses lately. Hilary’s (Mishael Morgan) exit was a crushing blow since she carried plenty of stories. Lily (Christel Khalil) also dropped down to recurring, so we’re seeing a lot less of her.

Ashley (Eileen Davidson) is also set to depart in the near future. Huge names are fading to the background or leaving entirely. The Young and the Restless could stand to bring in another huge name back to balance things out. Naturally, many Y&R viewers would like to see Michael Muhney (ex-Adam Newman) in the running. He’s quite possibly the most missed cast member on the CBS soap.

Even Muhney himself seems to think so! On Twitter, Muhney recently acknowledged all the messages he gets from fans calling for his return. When someone mentioned her hope for Adam’s resurrection, Muhney decided to bring up the incredible support he receives. He exclaimed, “You and the billion (slight exaggeration, but only slight) other people who tweet me about it over the years!”

The timing would be perfect and not just because of the departures we mentioned. Nick (Joshua Morrow) just went through a nasty breakup with Sharon (Sharon Case). She’s adamant that they’re over for good, so what’s Nick going to do next? He needs a story, but Phyllis (Gina Tognoni) may end up inching toward Jack (Peter Bergman).

Perhaps Chelsea (Melissa Claire Egan) needs to resurface and make amends with Nick. If that happens, it’s only a matter of time until Adam’s back in the picture somehow. That’d give Nick something to keep him busy. He could battle his brother for Chelsea and even Christian (Jude and Ozzy McGuigen). If Adam landed at Newman Enterprises again, he could also go to war with Dark Horse.

Y&R could always recast, but loads of fans would love to see Muhney reprise the role. That’d line up with the blind item, so you never know! The Young and the Restless spoilers say some surprises are looming, so we’ll give you updates as other news comes in. Stay tuned to the CBS soap and don’t forget to check CDL often for the latest Young and the Restless spoilers, updates and news.