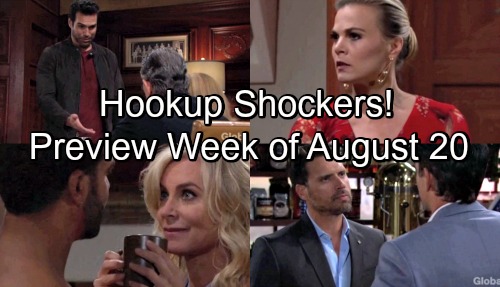 The Young and the Restless (Y&R) spoilers for the week of August 20-24 tease that we’ll see some serious tension in Genoa City. For starters, Nick (Joshua Morrow) will play dirty and leave Billy (Jason Thompson) fuming. After Nick buys the leasing company and raises the rent on Billy’s new boutiques, they’ll have a fierce faceoff. Billy will suggest that the new Nick Newman is “just like daddy after all.”

While Nick and Billy deal with their growing conflict, something else will be growing between Neil (Kristoff St. John) and Ashley (Eileen Davidson). After Ash spends the night at Neil’s place, he’ll wish her a good morning. Ashley will smile and note that it’s been pretty good so far. They’ll enjoy flirting, but Neil will wonder what happens next. These two will have a tough decision to make about their future.

Ashley and Neil may agree to head down a romantic path. Being friends with benefits is also an option. Then again, they may just decide to play it by ear and see where this leads. If love keeps blooming, they may not want to fight it. Unfortunately, Eileen Davidson will be leaving the show before long. Poor Neil had better not fall too hard!

Other Young and the Restless spoilers say Rey (Jordi Vilasuso) will approach Victor (Eric Braeden) and Nikki (Melody Thomas Scott). He’ll act all starstruck as he meets the happy couple, but he’s really got a hidden agenda. Rey’s investigating J.T.’s (Thad Luckinbill) disappearance, so Nikki and Victor are naturally on the suspect list. He’ll work to gain their trust and gather some into in the week ahead.

Over with Summer (Hunter King), she’ll continue “Operation: Steal Billy.” Summer knows she needs to flaunt her youth and body here. She’ll work with what she’s got going for her and hope it’s enough to lure Billy away from Phyllis (Gina Tognoni).

After Phyllis leaves the apartment, Summer will stand next to Billy in her bra. She’ll stand a bit too close for comfort as Phyllis returns for her forgotten phone. Y&R fans can expect Phyllis to lash out. She’ll feel like her unruly daughter is never going to change.

The Young and the Restless spoilers hint that Phyllis could witness an even more shocking moment soon. As Summer revs up her efforts to seduce Billy, Phyllis will decide to make her pay. You can bet Phyllis will seek vengeance before the week’s over, so stay tuned.

It looks like some great episodes are coming up. We’ll give you updates as other Y&R news emerges. Stick with the CBS soap and don’t forget to check CDL often for the latest Young and the Restless spoilers, updates, and news.