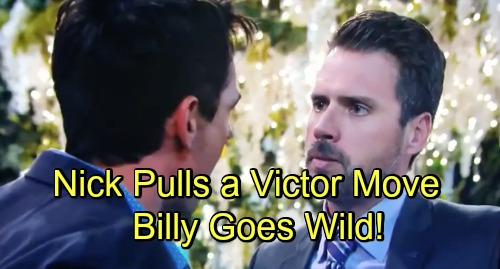 The Young and the Restless (Y&R) spoilers tease that Jack (Peter Bergman) will try to fulfill Ashley’s (Eileen Davidson) request. She’s hoping he’ll convince Nick (Joshua Morrow) to buy the leasing company Jabot’s using for their string of boutiques. If Jack can get Nick on board, they can pull the plug on those leases and bring Billy’s (Jason Thompson) project to a screeching halt.

When Jack makes his pitch on next week’s new Y&R episodes, Nick won’t seem too thrilled about the idea. He’ll argue that it sounds like a trick Victor (Eric Braeden) would pull. However, Jack will continue his efforts to persuade Nick. He’ll insist that it would give Nick some leverage, which could come in handy during his next battle with Billy.

Y&R fans know Nick and Billy kicked off their war not to long ago. Their fight ended with blackeyes and warnings about the future. Each of them seems to think he’s the fiercer enemy. Jack will want Nick to at least think about making the leasing company part of Dark Horse. He’ll make his final attempt to win Nick over and dash off.

Later, we’ll see that Nick’s been deceiving Jack. It turns out he’s already made the purchase! Nick clearly won’t mind doing something that’s Victor-ish. In fact, that’s pretty much all he’s been doing lately.

Victor was right during his recent chat with Sharon (Sharon Case). He suggested that Nick was a lot like his old man, which is definitely the case these days. The Young and the Restless spoilers say Nick will approach Billy at the athletic club. He’ll indicate that he’d like to make peace, but it’ll just be a setup for the bomb he’s about to drop.

Billy will be stunned when Nick reveals that he now owns the leasing company. To be fair, Nick won’t completely cut Billy off. He’ll keep the lease agreements intact, but there’ll be a huge catch. The Young and the Restless spoilers say Nick will raise the rent and make these boutiques far less profitable.

Billy will unleash his wrath, but this will just set the stage for their growing rivalry. Once the truth about Nick and Phyllis (Gina Tognoni) comes out, things will really spiral out of control. Y&R viewers can expect Billy and Nick to be vicious enemies this fall. It sounds like fans can look forward to major drama!

Are you anxious to see Nick and Billy’s cutthroat feud? Which man poses the biggest threat? We’ll give you updates as other Y&R news comes in. Stay tuned to the CBS soap and don’t forget to check CDL often for the latest Young and the Restless spoilers, updates, and news.